Dpt of Environment: On Farm Workshop for Monkey Management Options in St Kitts and Nevis 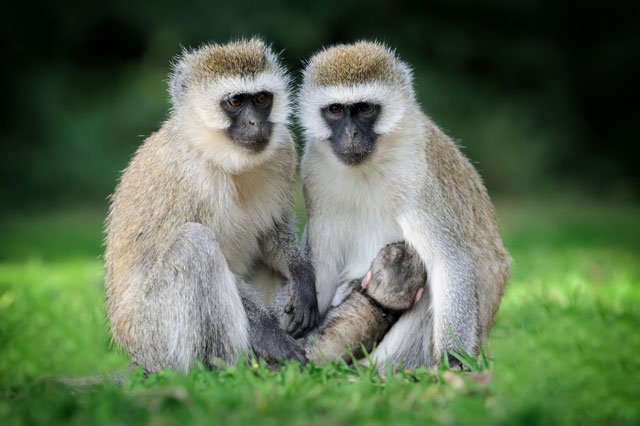 PRESS RELEASE – Tuesday 12th July 2022 —- The Invasive Alien Species (IAS) project headed up to the Armstrong Farm in Green Hill on Tuesday evening for a multi-stakeholder on-farm workshop about green monkeys, a species causing problems for many farmers, homeowners, and other stakeholders. Dr Joyelle Clarke, Communications Coordinator for the IAS project, felt it was important to take farmers into their natural workplace for this important conversation.

Mr Melvin James, former Director of Agriculture, was the main facilitator for the session. He engaged the farmers in an intimate discussion on their experiences and also shared practical experiences regarding managing the monkey problem. Farmers, along with the other stakeholders, discussed options for management such as electric fencing, zoning of agricultural areas, monkey control (trapping, culling, and use in biomedical research), ultrasonic sounds, and natural barriers such as low-lying prickly shrubs. Of note, farmers explained that monkeys can scale electric fences, walk through casha plants, or climb a macca palm tree even with spines just to eat the fruit. It was mentioned that the monkeys have been known to eat lizards, birds’ eggs out of the nest, small rodents, and all types of produce.

Farmer and Quarantine Officer in the Department of Agriculture, Nevis, Mr. Quincy Bart, noted that Nevisian farmers have had success with electric fencing and ultrasonic sounds. He estimated 70% of Nevisian farmers employ electrical fencing vs. approximately 2% in St. Kitts and he was socked by the extent of open farming happening in St. Kitts. However, farmers also shared their firsthand account of monkeys becoming very familiar with electric fencing, finding ways to get around the shock, as well as growing accustomed to noise deterrents and even plastic snakes and owls.

Host of the workshop, Mr Keithley Armstrong, outlined the challenges and expenses faced by farmers in the set up of farms and the additional investment that is required for the electric fencing. The cost, he explained, was a limiting factor for several farmers. One farmer even lamented about the limited access for even bullets to shoot the monkeys. The discussion outlined that there needs to be more done from the Department of Agriculture to ensure farmers are supported and more food is produced.

Mimi Armstrong, Social Media Ambassador to the project, alongside her father Mr Armstrong, led a discussion on the “farm to table” movement around the world and the desire for fresh, local food, citing that more needs to be done to encourage persons to go into farming and to reap the benefits of local, clean eating. The members of the SKTA were engaged with regard to marketing more agritourism in St. Kitts and Nevis, as farms in the mountain offer some of the most incredible views in the Federation and cool, clean, mountain air.

Farmers welcomed the opportunity to speak candidly about their frustrations, specifically citing how monkey management strategies are often catered to international persons such as tourists as opposed to the local knowledge of the farmers and residents. One SKTA official mentioned that some tourists are actually not pleased with the option for primate vending. There is more work to do as it relates to bridging the gap between farmer experiences and visitor experiences.

Dr Dore explained that the main output of the IAS project is a scientifically informed monkey management strategy that will be developed based on data that has been collected over her last twelve years of research and the last four years of research under the IAS programme. Most critical is that a sustainable approach is developed through a cost-benefit analysis that focuses on the areas where monkeys are having the most significant negative impacts. Agriculture thus far has clearly been negatively impacted, and work is currently underway assessing the monkeys’ impact to biodiversity and human health, the latter being assessed through collaboration with Ross University School of Veterinary Medicine.

In his closing remarks, Mr. Eavin Parry, Project Director, noted that a collaborative effort is one of the most critical steps in developing monkey management solutions for the Federation.