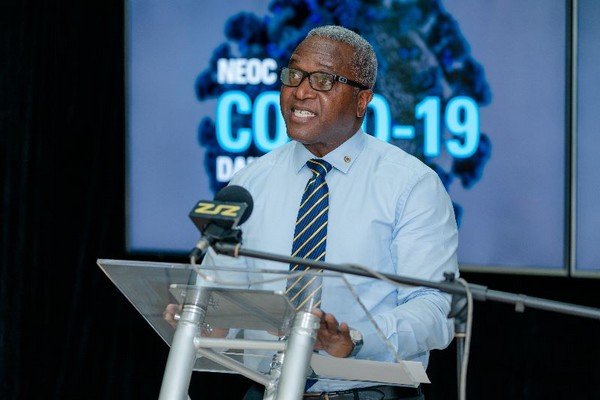 St. Kitts and Nevis (WINN): Dr. Cameron Wilkinson, Medical Chief of Staff at the Joseph N France General Hospital, confirmed that persons in the Federation have been re-infected with the Coronavirus during the fourth wave.

How high is the reinfection rate during this wave?

In an exclusive interview with WINN FM today, January 26, Dr. Wilkinson responded to that question saying, “First, let me say that when one gets vaccinated, the vaccine protects against severe disease and hospitalisation and death and we have had evidence that there are persons who have had breakthrough infections; which means persons who were  previously vaccinated  who are getting infected in this fourth wave. However, these persons are mainly asymptomatic or have very mild symptoms and they are recovering; and this tells us then that the vaccine is doing what it was intended to do.”

He continued, “In this fourth wave so far, we have had about 2 509 cases and of these 2 509  cases, seven of them were persons who were reinfected; in other words, persons who would have previously had COVID-19, recovered and got reinfected again”

Dr. Wilkinson declared that being infected does not give anyone lifelong immunity; so persons who were previously infected still need to be vaccinated. He also disclosed that, of the 7 persons who were re-infected in the fourth wave, 4 of them were unvaccinated. He therefore made an appeal for persons yet to be inoculated with a COVID-19 vaccine to do so.

The Medical Chief of Staff acknowledged that the high adult vaccination coverage in St. Kitts and Nevis has been a source of protection in this fourth wave. He added that, with the highly transmissible Omicron variant, the law of averages shows that the majority of persons who are affected would be the vaccinated. However, Wilkinson stated “because of the protection that they have through vaccination, they are recovering very quickly and the health system is not being overwhelmed.”

The doctor confirmed that persons who have been infected a second time are saying that the experience is no easier than the first time. They complain of fever, headache, chills and muscle aches etc. He concluded on the note that, COVID-19 can be a death sentence so we must all protect ourselves.