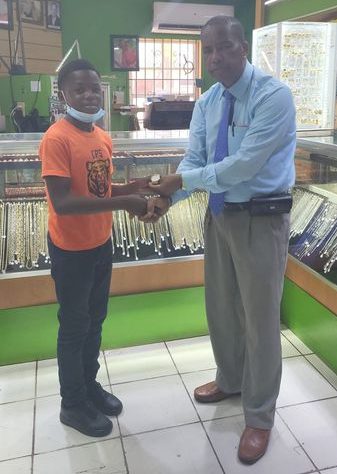 St. Kitts and Nevis (Sports Page) – It was a promise made and a promise kept.

Well known Jeweler on St. Kitts, Carlton Dupont, made a promise while he was attending the recent Gulf Insurance Interprimary sports meet, held at the Nevis Athletic Stadium, on April 27th.

He promised that he would donate a watch each, to the Victor and Victrix Ludorum, emerging from the signature event.

On Wednesday 18th May, the two-star performers from the meet, each accompanied by a parent, received their watches from Mr Dupont, at his store in Basseterre.

The Victor Ludorum is Kymarni Newton and the Victrix Ludorum is Adira Wallace.

Mr Dupont did not stop there. He later took them out to lunch as well.

The Ministry of Education on Nevis has extended heartfelt thanks to the Businessman for the kind gesture.