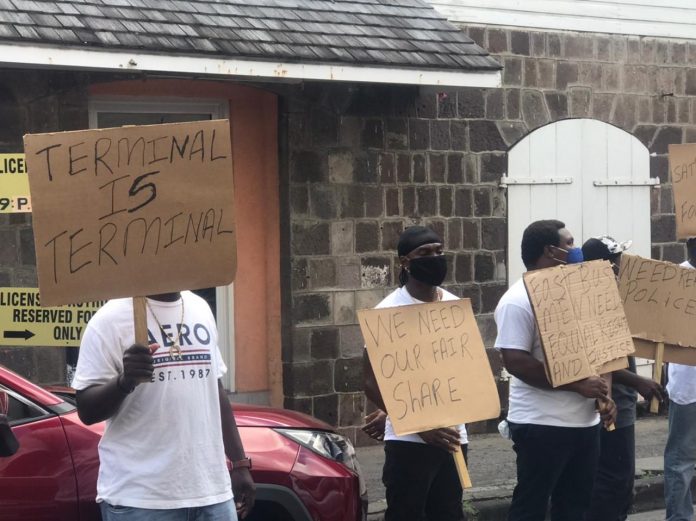 But let me back up a bit.

Prior to the demonstration on Church Street, WINN was on the scene at the East Line Bus Terminal on Wellington Road and was greeted with a terminal that could be likened to a ghost town.

I was able to speak with Jefferson Pemberton, president of the East Line Bus association.

“Over the years the government has promised us through the Ministry [of Transport], which was then led by Ian “Patches” Liburd, and those promises were not fulfilled.

In fact in parliament they mentioned that they would be assisting us in whatever way to help to apply our trade and that wasn’t done… When we moved to this terminal we were promised a lot of things, police presence, people to guide us and to help us upholding law and order, but we are not seeing that… when busses come from the bay road they pick up passengers and are soliciting passengers while [the passengers] are walking to the terminal, while busses are here [at the terminal] parked for hours… ”

The issues, as stated by Pemberton, are:

Other bus drivers soliciting passengers from outside the terminals

On that last issue of infrastructure, the Public Relations Officer Ronald Isaac also known as “Country” elaborated on the issue of 2019 busses having issues with navigating the queue as it was reportedly not wide enough;

“Last December they were suppose to rectify in here [the East Line Bus Terminal], because the Commissioner of Police reach in here since in March [2020] and they marked out three spots with public works, three spots in the queue [because] the queue is too narrow… and that is since December last year and up to now nothing…”

Pemberton made these recommendations:

More communication and participation from the Government

The consensus among bus driver to follow the protocols

As I was speaking to Pemberton a queue of East Line buses effectively blocked the entrance and exit of the bus terminal.

That blockade trapped vehicles in the terminal and it was later reported by a caller on Monday’s Voices that the buses were ticketed.

After a short demonstration at the East Line Bus Terminal, the drivers walked through town pickets in hand and ended up in front of the government headquarters hoping to get an answer, a response, a way to “Ease the squeeze!”