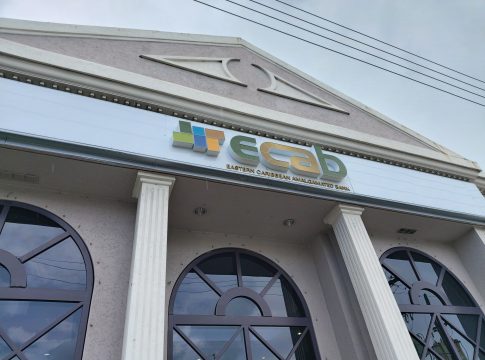 Antigua and Barbuda (Observer) – Business continued as usual at both of the former Bank of Nova Scotia (BNS) branches on Wednesday, but its High Street branch was noticeably decked out in the signature colours and logo of the Eastern Caribbean Amalgamated Bank (ECAB).

This signalled the first day of ECAB’s legal ownership of the Canadian bank, a decade after the indigenous bank began operations in the country.

ECAB’s General Manager, Michael Spencer, said he and his team were thrilled to arrive at this point after a long process. The transaction was finally closed on Tuesday evening.

“I think the teams have been excited thus far but this is just day one so we have a long time to go and we expect that the teams will be involved as we plan the integration of the assets on to the ECAB platform,” he told Observer.

Antigua and Barbuda was also expected to be part of the acquisition.  However, Prime Minister Gaston Browne refused to issue the vesting order under the former terms of agreement and without initial consultation with his government. He insisted that local banks be given the first right of refusal in the Canadian bank’s sale.

This week’s completion of that sale is the result of at least two years of negotiation. The parties had to get a better understanding of the business and make the necessary applications to the regulatory bodies for approval.