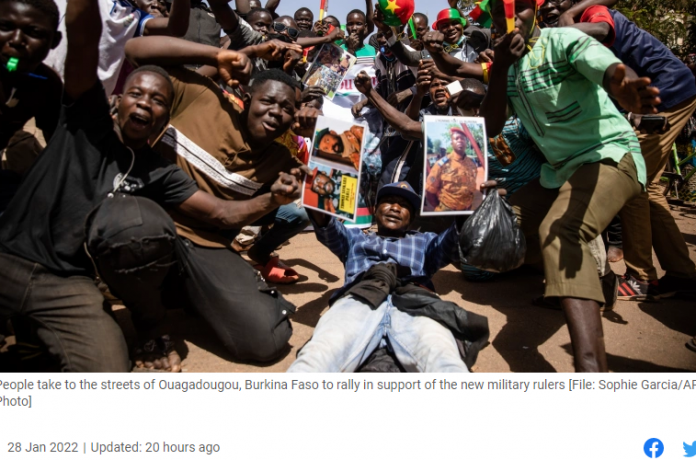 (Al Jazeera) The West African regional bloc, ECOWAS, has suspended Burkina Faso in the aftermath of a military coup, making it the third member nation to be punished for a military takeover in only 18 months.

The soldiers went on state television to announce their military takeover of the country, which they said was under siege from armed groups. The military rulers said Kabore failed to stem the violence that has killed thousands during his time in power.

West African leaders met virtually on Friday to discuss the Burkina Faso coup, and a delegation was expected to travel to the Burkinabe capital, Ouagadougou, in the coming days.

“The rest of the world is looking up to us to be firm on this matter,” he said.

A mission of ECOWAS chiefs of staff will fly to Burkina Faso on Saturday, followed on Monday by ministerial-level envoys.

Al Jazeera’s Nicolas Haque reporting from Ouagadougou said, “The heads of the military in the region will be meeting with the new strongman of this country, Lieutenant-Colonel Paul-Henri Tamiba on Saturday to try to apply pressure on him.”

The leaders will meet again on February 3 in Accra to assess the outcome of these missions and see whether additional sanctions should be imposed along with suspension, a summit participant told the AFP news agency.

Haque said, “There were strong words in this meeting chaired by Ghana’s president. He said this was a setback for democracy in the region.

“There were words from Niger’s foreign minister. He said: ‘We do not understand that military leaders – after having failed in the field of war – take political power and call on mercenaries to defend the integrity of their territory,” Haque said.

“He’s referring to Russian fighters from the Wagner group that are active in neighbouring Mali and the Central African Republic.

“They said on Thursday that they would be happy to help in Burkina Faso if they were called upon.”

At the virtual summit lasting about three hours, the ECOWAS leaders also called for Kabore and other detained leaders to be released.

On Tuesday, the bloc issued a statement of condemnation over the coup and accused the military of forcing Kabore to resign “under threat, intimidation and pressure”.

In the past 18 months, the 15-nation ECOWAS has suspended two other members – Guinea and Mali – where coups have occurred.

ECOWAS suspended neighbouring Mali after a coup there in August 2020 and then took similar action against Guinea after the president was overthrown last September.

Mali is also under punishing economic sanctions, including flight bans and asset freezes, after its coup leader failed to organise elections within 18 months as promised.

Haque said the latest suspension on Burkina Faso “has very little effect” as the sanctions put in place in Guinea and Mali “has done very little to change things”.

ECOWAS has faced criticism for its handling of the coups, particularly in Mali where mediators negotiated with the military government on the 18-month deadline for holding democratic elections.

Mali’s coup leader has said that will not be met, citing security conditions, and has announced a vote four years from now instead.