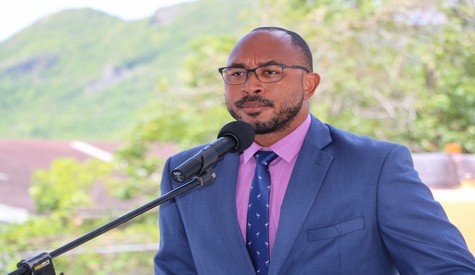 St. Kitts and Nevis (WINN): Minister of Education the Hon. Jonel Powell is shutting down claims that the construction of the new Basseterre High School would pose an environmental threat to the Basseterre Aquifer.

“Persons who have been trying to muddy the water have been spreading a lot of misinformation as it relates to the Basseterre Aquifer and the construction of the new Basseterre High School…and so again, I dispel the misinformation that detractors have been very irresponsibly putting out there,” said the Education Minister in an interview with WINN FM on Wednesday, February 09, 2022.

He added: “The concerns that were being raised were more in relation to the water table which is located at the Royal Basseterre National Valley which is that area to the east of the Kim Collins Highway where we are not building the Basseterre High School.

We are building it further west, closer to town, where it does not in any way affect the water table and our water supply in Basseterre,” Minister Powell continued.

While Minister Powell stopped short of providing a specific date for the start of construction, and the estimated cost, he revealed that plans are progressing smoothly for the new Basseterre High School.

In May 2019, during the Ministry of Education’s presented Community Forum on the construction of the new Basseterre High School, Director of Public Works Cromwell Williams said the construction does not pose a threat or danger to the potable water supply.

WhatsApp
Facebook
Twitter
Linkedin
Email
Print
Previous articleMatter involving Government Minister and police officers in the hands of DPP
Next articleMedical and relief supplies were handed over to the government of St. Kitts and Nevis.