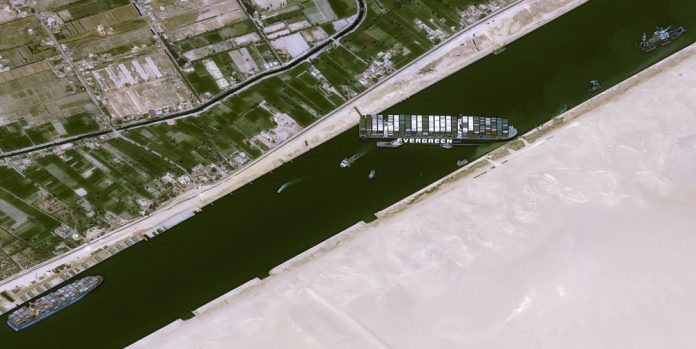 SUEZ, Egypt (AP) — Tugboats and a specialized suction dredger worked Friday to dislodge a giant container ship that has been stuck sideways in Egypt’s Suez Canal for the past three days, blocking a crucial waterway for global shipping.

The Ever Given, a Panama-flagged ship that carries cargo between Asia and Europe, ran aground in the narrow canal that runs between Africa and the Sinai Peninsula. It got stuck in a single-lane stretch of the canal, about six kilometers (3.7 miles) north of the southern entrance, near the city of Suez.

The ship, owned by the Japanese firm Shoei Kisen KK, has blocked traffic in the canal, causing headaches for global trade.

Around 10% of world trade flows through the canal, which is particularly crucial for the transport of oil. The closure also could affect oil and gas shipments to Europe from the Middle East.

At least 237 ships were waiting for the Ever Given to be cleared, including vessels near Port Said on the Mediterranean Sea, Port Suez on the Red Sea and those already stuck on a lake mid-canal, said Leth Agencies, which provides services for the canal.