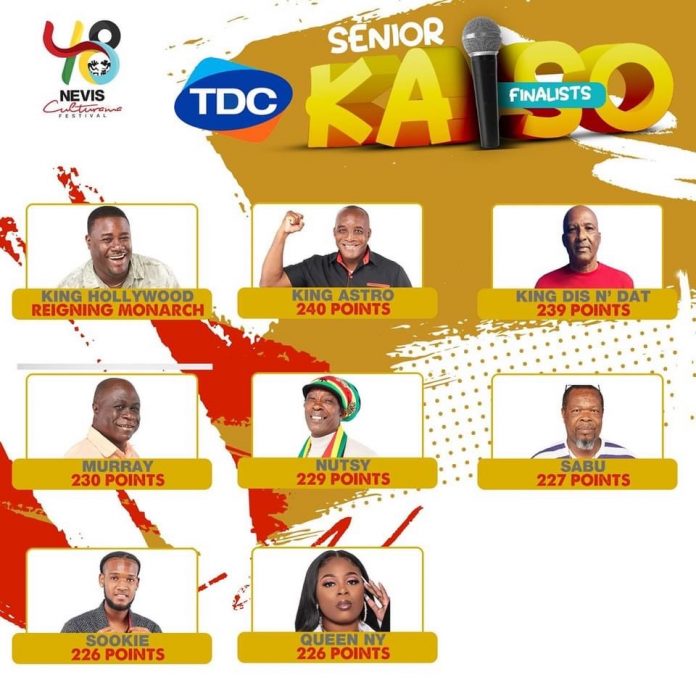 St Kitts and Nevis (WINN): The Culturama 48 Senior Kaiso finalists have been announced following results from the Calypso Semi-Finals on Sunday night, July 17 2022.  The event was held at the  David Freeman Centre Of Excellence.

At the end of the night, King Astro amassed a total of 240 points singing “De Spell,” Dis N’ Dat received 239 points with the Kaiso “De Plot”, Murray received 230 points with “Sing a Good Calypso,” Nutsy sang “De Culture Virus” thus receive 229 points and Sabu amassed a total of 227 points singing the calypso “Loud and Clear.” The youngest male competitor, Sookie and youngest female competitor, Queen NY, both received a total of 226 points; singing “Your Wish is my Command” and “A Mother’s Cry” respectively.

The seven calypsonians will be coming up against reigning Monarch Hollywood on Thursday, July 28th 2022.

Eight other Calypsonians, namely: De Undertaker, Enforcer, Polo, Irwin, Pupa Wheeler, Baker, Keedo, and Bahowlah The Meek did not advance to the finals.