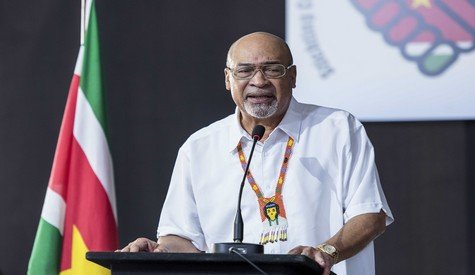 (CMC) – The people of Suriname are voting in a general election on Monday with the outcome likely to determine the future direction of the Dutch-speaking Caribbean Community (CARICOM) country.

The elections will also be observed by teams from the Caribbean Community (CARICOM), the Organisation of American States (OAS), the United States, Brazil, Venezuela and France will have observers through their embassies in Paramaribo.

Interior Minister Mike Noersalim said that the international observers will have access to all polling stations.

The campaign here was marred by the death of Ileen Sandaal, an opposition candidate, who was killed on Saturday night as a result of a collision in the Para district, near Cabendadorp

The polls, the ninth since the country attained independence from the Netherlands in 1976, is being closely watched as President Desi Bouterse who has appealed a 20 year-jail term, is facing a strong challenge from Chandrikapersad (Chan) Santokhi, leader of the Progressive Reform Party (VHP), the largest party in the opposition.

A former police commissioner, Santokhi had served as justice minister from 2005 to 2010 and ran as presidential candidate in the last two general elections, losing to Bouterse on both occasions.

Bouterse’s National Democratic Party (NDP) has dismissed an opinion poll published last Friday indicating that the ruling party would be defeated in the election. In the 2015 poll, the party won 27 of the 51 seats and 80 percent of the votes cast.

Electoral officials said that 17 political parties are contesting the 51 seats in the National Assembly. The electorate is 385,000 people strong, divided into 10 voting districts.

Bouterse is running for the third time. He first took power in 1980, when he led a coup d’état and sacked the then government and installed military rule. He lost the democratic elections of 1987 but came back strong and won by landslides in 2010 and 2015.

Political observers say that the ABOP party of former guerrilla leader, Ronnie Brunswijk that in 2010 formed the Mega Combination coalition with Bouterse’s NDP, but has since sworn never to work with Bouterse again.

He has warned against Haitians being allowed to vote for the ruling party in the elections, saying “Haitians, I am warning you now….if they come there we will beat them with sticks”.

The elections are taking place in spite of the coronavirus crisis (COVID-19) and its restrictions. The Suriname Constitution only allows for a postponement in case of war or other extraordinary circumstances, and the corona crisis is neither.

Political parties have also been critical of the President’s resolution, which includes the special rules that will apply to polling stations Monday during the elections due to coronavirus (COVID-19) pandemic.

In particular, they have criticized the provision that polling chairmen may suspend and resume the counting of votes “in view of circumstances that could arise in relation to the corona situation”.