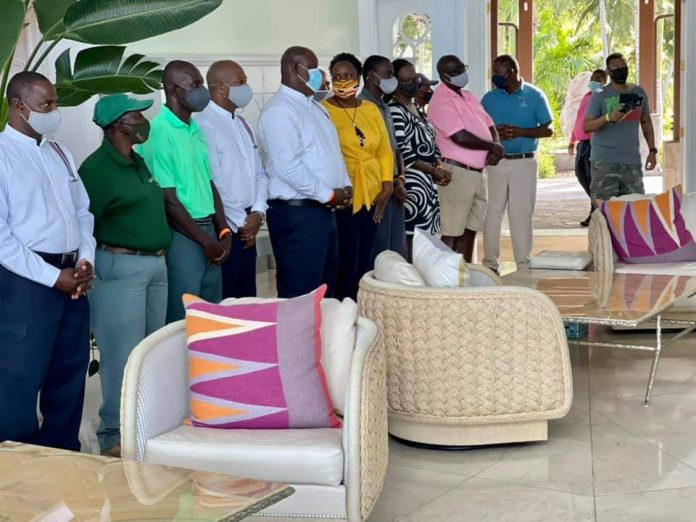 St. Kitts and Nevis (WINN) — Some employees that were honoured by the Four Seasons Resort Nevis for their commitment and years of service on the occasion of the Resort’s 30th anniversary spoke with WINN about how it feels to be a part of the Four Seasons family.

Ms. Cresentia O’ Flaherty, the Resort’s Executive Assistant, reflected on the challenges that were posed during the construction of the resort back in 1989.

“During the construction, we were affected by Hurricane Hugo which delayed the construction. I joined the company in December 1990, and it has been an amazing journey from that time. We had very tough times, especially during the hurricanes but through it all…we came back stronger than ever and I’m quite happy to still be here after 30 years,” said Ms. O’Flaherty

WINN also interviewed Mr. Elison Smithen, a Safety and Loss Prevention Officer, who reminisced on the early days of his employment with the resort. Mr. Smithen said when he heard about the Four Seasons Resort Nevis, he made the decision to apply, even though he has never worked in the hotel industry before.

“…up until today, I still enjoy what I am doing. My very first day on the job was a bit hectic… I started on the pm shift where it was very dark and I didn’t know the surroundings. I remember when we used to travel around the property with a big flashlight that wore about five pounds. A Lot of construction was going on at the time, and we had just started with only a few security [officers] and I was fortunate to be one and up until today I am still part of the security department,” he said.

The employee of the year award was presented to Sylvester Pemberton for his hard work and dedication to providing excellent customer service and warm Nevisian hospitality.

In speaking with Mr. Pemberton, he said “during the COVID-19 pandemic, the most positive experience is when guests come to the resort and leave a good review and would say they look forward to coming back”.

Mr. Pemberton in speaking about the experience he has had working with the Four Seasons family said, “It has been great! I’ve been here for nearly 30 years, and if it wasn’t for Four Seasons I don’t know where I would have been,” adding that he looks forward to staying with the company until retirement age.

The Four Seasons Resort Nevis was the first-of-its-kind to be built in the Caribbean and second in the Americas. The 30-year-old resort boasts of an 18 hole golf course named after famous American golf architect, Robert Trent Jones II. The 189 room resort which sits on 350 acres is currently headed by Mrs. Yvette Thomas-Henry of Kittitian heritage.

WhatsApp
Facebook
Twitter
Linkedin
Email
Print
Previous article
Three Bills to be Introduced at National Assembly On Thursday, February 18
Next article
US$100,000 Towards the Development of an Intangible Culture Heritage Secretariat