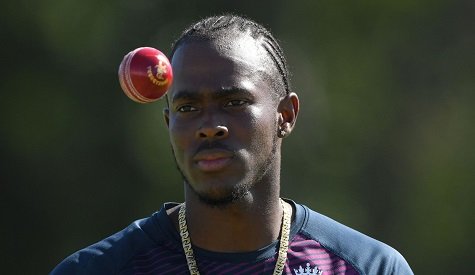 MANCHESTER, United Kingdom (AFP) — England paceman Jofra Archer was Thursday ruled out of the second Test against the West Indies for breaking coronavirus protocols, giving the home side a major headache as they seek to level the series.

Both teams have been living in “bio-secure bubble” sites at the Ageas Bowl, the venue for last week’s first Test, and Emirates Old Trafford, where the final two matches of the series will take place.

Sussex fast bowler Archer broke the rules by going home to Brighton on Monday following the end of the first Test, before the team travelled up to Manchester.

His removal from the squad was announced just three hours before play was to have begun in Manchester.

He apologised for putting his teammates in “danger” and will now undergo five days of self-isolation.

“I am extremely sorry for what I have done,” Archer, who played in last week’s first Test, said in an England and Wales Cricket Board (ECB) statement.

“I have put, not only myself, but the whole team and management in danger. I fully accept the consequences of my actions, and I want to sincerely apologise to everyone in the bio-secure bubble.”

Archer, who had been retained in the squad while fellow quicks James Anderson and Mark Wood were rested, will need two negative tests for COVID-19 before his isolation period is lifted.

“The West Indies team have been made aware and are satisfied with the measures that have been imposed,” the ECB statement said.

A spokesman said the breach had come to light late on Wednesday. He could not confirm if Archer would face disciplinary action in addition to missing the second Test on health grounds.

The spokesman added that England do not track player or management movement between Tests.

Archer’s breach of the rules, however, is likely to provoke an angry response from officials after they made strenuous efforts to persuade both the West Indies and Pakistan to tour England despite tens of thousands of coronavirus deaths in Britain.

Earlier in the campaign, there was real concern that COVID-19 could wipe out the entire 2020 home English cricket programme, with the ECB predicting losses running into hundreds of millions of pounds.

Barbados-born quick Archer burst onto the international scene last year when he bowled the decisive Super Over in England’s World Cup final win over New Zealand at Lord’s.

His absence deprives England of genuine speed on an Old Trafford pitch with a reputation for aiding fast bowlers.

The 25-year-old hit the 90 miles per hour mark during a return of 3-45 in the second innings at Southampton — although the West Indies still won the first Test by four wickets.

“No (not ideal),” said returning England captain Joe Root when asked about Archer’s situation at the toss.

“But enough has been said on it, the stuff that has gone out this morning,” added Root, back leading the side after missing the first Test to attend the birth of his second child.

Archer’s omission meant Ben Stokes — the stand-in skipper last week — was the only survivor from England’s pace attack at the Ageas Bowl.

Stuart Broad, second only to Anderson in England’s all-time list of Test wicket-takers, returned after being left out at Southampton, with fellow pacemen Chris Woakes and Sam Curran also recalled.

It was England’s batsmen who were first into the action, however, after West Indies captain Jason Holder won the toss and fielded in overcast conditions.

If West Indies win one of the two remaining matches of this campaign, they will secure their first Test series victory in England for 32 years.