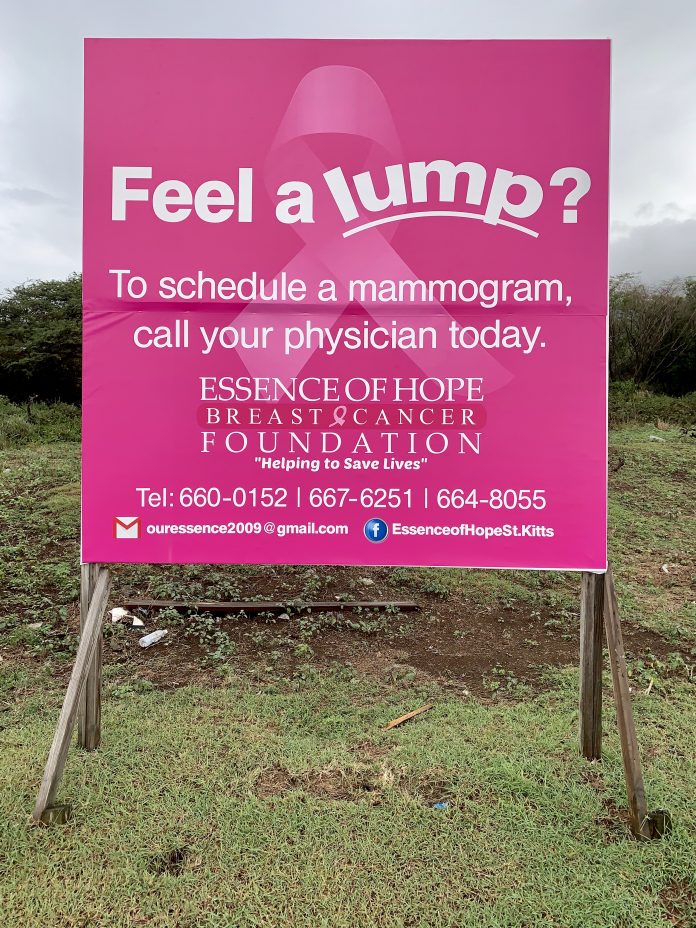 BASSETERRE, St. Kitts: On the eve of Breast Cancer Awareness Month, the Essence of Hope Breast Cancer Foundation has launched its mammogram campaign. As part of this campaign, a billboard has been erected at the roundabout leading to St. Peter’s. The billboard encourages women, that “Feel a lump”, to schedule a mammogram through their physician.

“From our inception in 2009, Essence of Hope has been continuously and strongly encouraging women to do breast self-examinations and if they feel a lump, to get a mammogram,” said Ms. Pam Hendrickson, Chair of Essence of Hope. “Sadly, we are still seeing many women diagnosed with breast cancer between the ages of 40-75+ years old who have never had one mammogram prior to their diagnosis.”

According to the Centers for Disease Control and Prevention (CDC), a mammogram is an X-ray image of your breasts used to screen for breast cancer. Mammograms play a key role in early breast cancer detection and help decrease breast cancer deaths. Regular mammograms are the best tests doctors have to find breast cancer early, sometimes up to three years before it can be felt. Many women begin mammograms at age 40 and have them every one to two years.

According to Essence of Hope’s public relations officer, Dr Marcus L Natta, the billboard forms only part of a larger media campaign. Ads will also be erected at bus stops, through a collaboration with Adopt-a-Stop SKN. Additionally, Essence of Hope will utilise its social media platforms to bolster the mammogram campaign.

Breast Cancer Awareness Month, marked in countries across the world every October, helps to increase attention and support for the awareness, early detection and treatment as well as palliative care of this disease.