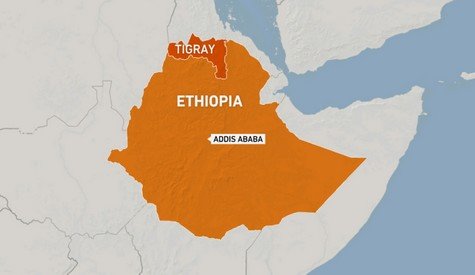 (CNN) The White House will eject Ethiopia from a trade program between sub-Saharan African countries and the United States over human rights violations, according to a statement Thursday.

Ethiopia was found to be in violation of section 506a of the African Growth and Opportunity Act (AGOA), the statement added. The clause stipulates that eligible nations must not engage in “gross violations of internationally recognized human rights.” The move comes after a CNN investigation earlier this year.

President Joe Biden formally announced the decision in a proclamation, a month after he informed Congress that he intended to terminate Ethiopia’s membership of the deal.
The termination notice, which also applies to Guinea and Mali, is effective January 1, 2022.

“Despite intensive engagement between the United States and the Governments of Ethiopia, Guinea, and Mali, these governments have failed to address United States concerns about their non-compliance with the AGOA eligibility criteria,” Biden said.
CNN has reported extensively on human rights abuses committed during the conflict, including detentions, acts of sexual violence, and killings that bear the hallmarks of genocide — findings that have contributed to calls from bipartisan lawmakers for the administration to take action.

An investigation by CNN released in early October found that the Ethiopian government has used the country’s flagship commercial airline, Ethiopian Airlines — a key AGOA beneficiary — to shuttle weapons to and from neighboring Eritrea during the course of the war. Ethiopian Airlines said in a statement that it “strongly” refuted the findings of the investigation.

Shortly after the investigation, US officials told CNN they would review Ethiopia’s eligibility in 2022, the scheduled review point.

In November, the conflict in Ethiopia passed a grim, one-year milestone. There have been repeated calls from the US and the international community for the parties to the conflict, including the government of Prime Minister Abiy Ahmed, Eritrean forces and the Tigray People’s Liberation Front (TPLF), to end hostilities.