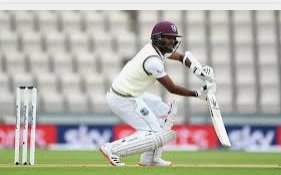 ST JOHN’S, Antigua – The first Sandals Test match is intriguingly poised with one day left to play at the Sir Vivian Richards Stadium. Sri Lanka dominated the fourth day on Wednesday and scored 476 in the second innings – with a patient, maiden century on debut by Pathum Nissanka (103) and Niroshan Dickwella (96).

The pair added a record 179 for the sixth wicket and Nissanka became the first Sri Lankan to make a century away from home in his first match.

He eventually fell to a catch by Kemar Roach from the bowling of off-spinner Rahkeem Cornwall, who ended with 3-137 off a marathon 42.5 overs. Roach had the best figures of 3-74 off 27 overs to end the match with six wickets – following up his 3-47 off 16 overs in the first innings.

This left the West Indies with a victory target of 375. They reached 34-1 at the close and will require another 341 to win on the final day with nine wickets in hand.

Nkrumah Bonner will resume Thursday on 15 not out and with him Captain Kraigg Brathwaite on eight not out.