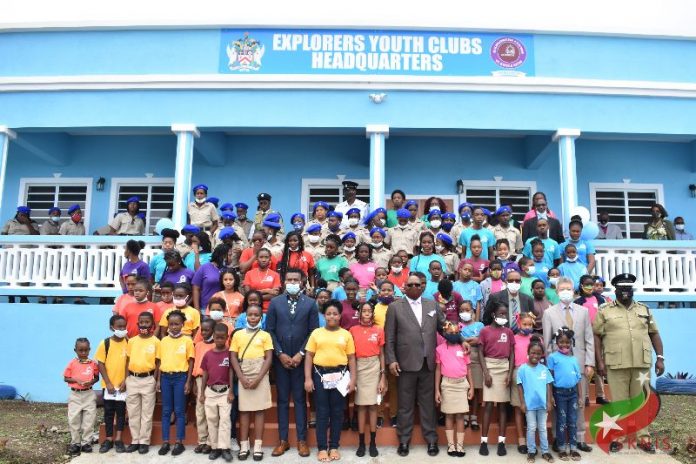 Basseterre, St. Kitts (SKNIS): The Explorers Youth Clubs now have a permanent place to call home following the official opening of their headquarters in Phillips Village.

The new 10,420 sq. ft building was opened by Prime Minister and Minister of National Security, Dr. The Honourable Timothy Harris, at a ceremony on Thursday, December 31, 2020. It was built by M&D Construction at a cost of $2.47 million. It features a number of amenities for the members of the twelve Explorers Clubs across St. Kitts. Each club is expected to have weekly sessions there when the threat of COVID-19 ends.

Project Engineer, George Gilbert of the Public Works Department, congratulated Myron Percival and his company M&D Construction for the excellent work in building the facility. Mr. Gilbert said that the sleeping rooms with accompanying bathrooms for males, females, and staff will allow camping events. Also featured are a recreation room, offices, a common dining room and kitchen, and a laundry area. There are three 500 gallon water storage tanks on the roof.

In giving remarks, Prime Minister Harris referred to the incredible growth of the Explorers Movement, which started in July 2017 with the launch of the Mol-Phil group. Since then, other communities have joined including Tabernacle, Shadwell, Cayon, Newtown, Lodge, Old Road, Dieppe Bay, St. Peter’s, St. Paul’s, Trinity, and Newton Ground.

Dr. Harris said that there are over 1,200 hundred explorers and he expects the numbers to continue growing as other communities have signalled an eagerness to establish clubs.

“This is a legacy development in the context of law and order in our country,” the prime minister stated. “This is a legacy initiative that generations after us will speak to as being an important stabilizer of our society and contributing to the advancement of St. Kitts and Nevis.”

He added that the government remains committed to the empowerment of young people as well as the rule of law within society. This is reflected in the record amounts allocated to related ministries for the 2021 fiscal year.

Prime Minister Harris appealed to parents, businesses, and other stakeholders to join with the government in building a stronger and safer future for all.