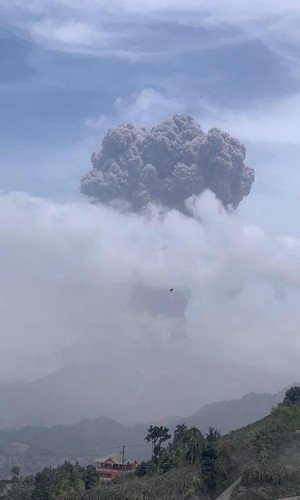 St. Kitts and Nevis (WINN): On April 13, the anniversary of the 1979 eruption of the La Soufriere volcano, St Vincent and the Grenadines experienced two eruptions one in the morning and the other at night.

The late-night eruption pulsed for more than 40 minutes and generated a continuous seismic tremor which lasted for four to five hours.

The explosions produced pyroclastic density currents (PDCs) which appear to have gone down valleys that drain towards the Rabacca River on the east coast of the island.

Dr. Robert Richardson of the University of the West Indies Seismic Research Center (UWI-SRC) explained what was observed during the night.

The UWI-SRC reported that La Soufriere’s current pattern of explosions appear to be episodic (stop and go) and over the past 24 hours, the time between each explosion has increased.

Lahars (mudflows) were reported in the Sandy Bay Area on April 13.

Although the volcano has had explosive eruptions since April 9, people in the red and orange zones have reportedly refused to leave despite the national disaster occurring that endangers their life.

In a video clip circulating social media, a police officer was urging a man who was still in the danger zone to evacuate.