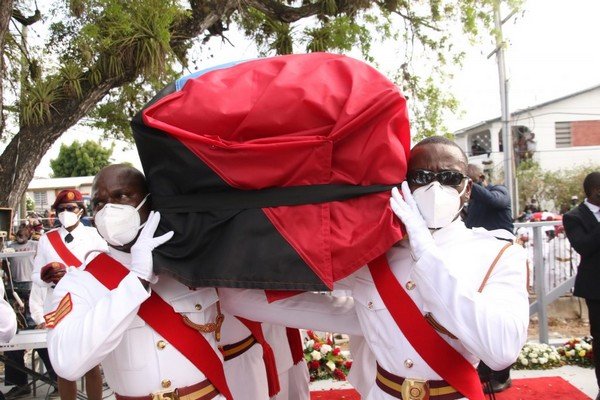 (Antigua Observer) The historic Sir Vivian Richards Cricket Ground served as the backdrop for scores of mourners to pay their final respects to Sir Lester Bryant Bird – a national hero, former prime minister, the ‘comeback kid,’ the political juggernaut credited for being “the father of modern Antigua and Barbuda.”

Since his passing on August 9, residents have been reminded about his political exploits and diligence, not only in Antigua and Barbuda, but in the regional integration movement and further afield.

However, Sir Lester’s daughter Donyelle Bird-Browne told those gathered for the ceremony that the former prime minister was for her and her siblings, a father.

As she delivered the eulogy to the rapt audience, she spoke of “a young boy who reveled in the freedom allowed running barefoot through the streets and playfields of the Ovals and Ottos section of St John’s” as he was raised by the late father of the nation Sir V.C. Bird Snr and Lady Lydia Bird at their Tanner and Temple Streets home.

WhatsApp
Facebook
Twitter
Linkedin
Email
Print
Previous article
18-member squad named for West Indies Rising Stars U19 tour of England
Next article
Tropical Storm Ida could be a major hurricane along the US Gulf Coast this weekend, putting Louisiana and other states on alert