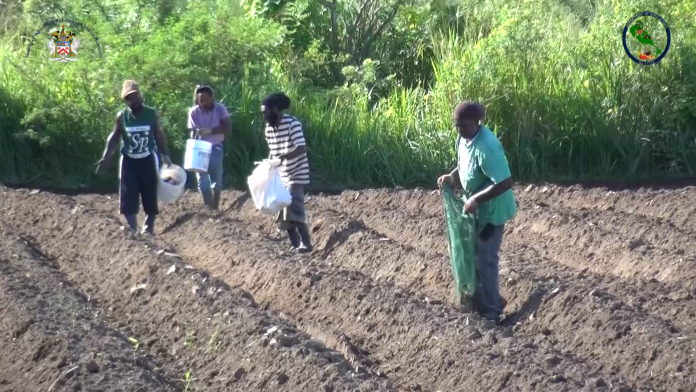 The agricultural crop production training initiative which is being held at the Fahies Outreach Center in Newton Ground is a joint initiative between the FAO and the Ministry of Agriculture, Fisheries and Marine Resources. 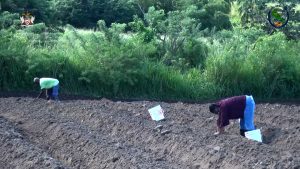 This week the training focuses on lessons found in Agro Ecosystem Analysis (AESA). Since the health of a plant is determined by its environment, this AESA process involves small groups of participants collecting data from field studies, discussing the findings, and arriving at an agreement for Integrated Pest Management (IPM) crop management while using the information gathered as the basis for field management decisions.

In an interview with the Ministry of Agriculture’s Media and Communication Unit on Monday, Crop Extension Officer in the Department of Agriculture who is responsible for District 3, Dion  Weekes said that the training will see the implementation of over 5000 root and tuber crops that were recently procured by the government and distributed to local farmers who would then be able to grow the crops at their own farms.

“We decided to put down a Farmer Field School Project with some of the materials that we brought in; mainly Eddoes and Tannia which we had to do some mini sets and cut them up to plant and so we selected certain young farmers who haven’t been involved in the crop before and decided to take the Field School to give them an experience of producing the crop and at the end they would be able to reap the crop and carry the crop to their farm in a different area in the district”, Weekes explained. 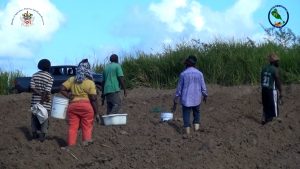 Meanwhile, Facilitator and Crop Extension Officer with responsibility for District 1, Lionel Stevens gave his perspective on the training and explained how the Farmers Field School contributes to the reduction of imported roots and tuber crops. 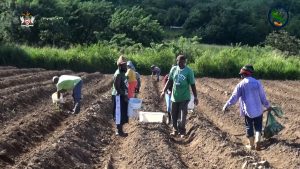 Stevens said, “it is a project that the Department has undertaken to try and increase our production of these root tubers seeing that we import them heavily on a weekly basis more so from the neighbouring islands. This Field School is an attempt to broaden farmers’ knowledge of the production of these crops and it would be undertaken here at Fahies which is an area where we receive quite a good volume of rainfall so it’s kind of ideal to aid in the production of these root tubers. This is an area where we have the Outreach Center here as well, where we do trials for different crops and is trials based on rain-fed conditions knowing that the volume of rain that this area receives.

Stevens also used the opportunity to invite other farmers to participate in the ongoing training.

“As it pertains to the Field School, we want to encourage young farmers in the area, farmers who are experienced or also farmers who want to gain further knowledge in this particular area of production. With our first experience with the Farmer’s Field School, the crop in question was cabbages. We did quite a few Field Schools where we focused on cabbage production, so now this is a shift in terms of using that same initiative but transferring the knowledge to different crops. We just want to encourage farmers to come on and be part of it and acquire the knowledge that is being offered”, he expressed.

The experiences that farmers gain from this interactive and participatory “learn by doing approach” will give them the opportunity to increase yields, multiply their income and ultimately improve their livelihoods.