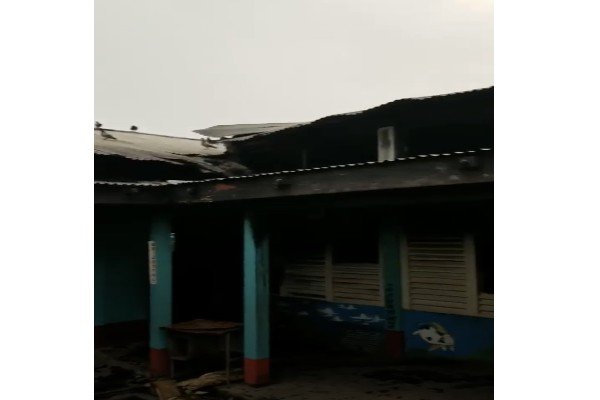 The video showed classrooms charred from the floor to the roof.

The Royal St. Christopher and Nevis Police Force (RSCNPF) and the St. Kitts Fire and Rescue are investigating the matter.

The Public Relations Officer for the RSCNPF, Jacquline Bryan, could not provide any additional information as she awaits reports from both Fire and Rescue and the Police.

WINN reached out to the Acting Fire Chief, Mr. Garfield Hodge, for comment but was unsuccessful at News time.

Permanent Secretary in the Ministry of Education, William Hodge, told WINN he was at the scene this morning but was not at liberty to speak on the situation at the moment.

No indication was given as to the cause of the fire, whether there were any injuries or any additional damage to surrounding areas or properties.

We also await information on where the primary school students will receive instruction on Monday morning (March 21).

He expressed support for the staff of the primary school who he said are currently overwhelmed by the incident and asked that parents remain calm.

Hodge went on to say that a meeting will be held with the parents and teachers of the students about the interim contingencies for the instruction of students from the Joshua Obadiah Williams Primary School.

A meeting with the teachers would take place Saturday afternoon (March 19).

The meeting with the parents will be held on Sunday (March 20) at the Molphill Building in Molphill (the area between Molineux and Phillip’s) at 5 p.m.

The Permanent Secretary said the cause of the fire would be communicated shortly.

“The investigations are carrying on very vigorously and very shortly we would know what is the situation; whether it was an electrical fault or whether it was arson. These determinations would be made subsequently. At some point, the building will be turned over to education and we are expecting that public works would begin to undertake the work in a very expeditious manner so that our students would be able to return to their school.”


WINN will provide more information as it becomes available.