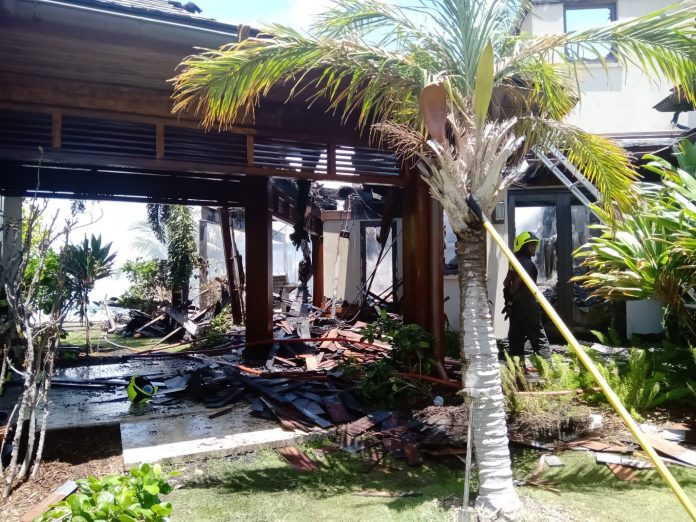 St Kitts and Nevis (WINN): A property at Christophe Harbour was extensively damaged by fire during the early hours of Tuesday morning.

According to a senior fire officer, a call was made to the St. Kitts and Nevis Fire and Rescue Services at about 3:59 a.m. on Tuesday morning (June 21). The first responders on the scene were fire personnel from the Fire Headquarters in Basseterre.

The lead Fire officer in a conversation with WINN FM said the team made its way to the scene immediately and upon their arrival, met the property in flames. He said, having begun to extinguish the fire, they recognised the situation was too much to handle and made a call for backup.

On scene were four fire tenders from the Basseterre Fire Headquarters, the Sandy Point Fire Station, the Tabernacle Fire Station and the Robert Llewellyn Bradshaw International Airport fire hall. Together, there were approximately 35 to 40 firefighters on the scene of the fire.

The main house of the property consisted of two floors; two bedrooms, a gym, two living rooms, a boiler room, bar, dining room, kitchen, pantry, half bathroom, an information technology room, and a garage. On the outside were two cottages, a dock and a jetty. Following the fire, only one of the cottages, the garage and the jetty were not destroyed.

The firefighters were on the scene for over 12 hours as they tried to ensure that the fire was properly extinguished. However, there were a few hiccups that the officers encountered as they carried out their duties. These include water and oil issues.

According to fire personnel, once the water in each fire tender was finished, the tender was forced to travel a long distance back to a fire hydrant in the area of the Frigate Bay roundabout, closest to the St. Kitts Marriott Resort. This was due to a lack of water availability in the area. Calls were made to the appropriate authority to provide assistance but were unsuccessful. As a result, a water truck was summoned to the scene to deliver water, some hours later.

Later, a decision was also made to use a portable pump to get water from the pool and the sea. Having used the pump for hours, the pump began to run low on oil. However, fire officers were fortunate to receive oil from property workers, who shared that the jet skis on site used the same oil.

Firefighters left the scene at Christophe Harbour about 4:30 on Tuesday afternoon. Some worked beyond their 24 hour shift and off-duty officers reported to work to provide assistance. One firefighter had a mishap but indicated to WINN FM that he is doing okay.

Whilst on the scene, WINN FM had an extensive conversation with property owner Susi Beatty who shared that she was totally devastated by the whole incident. An emotional Beatty stated, “I lost 9 million dollars.”

Beatty also shared that she is a recipient of a global award for the property for building architecture and interior design. She said it was a beautiful place and reiterated that she is truly hurting. Firefighters and property workers were able to salvage some of the resources from the burnt building.

Beatty has extended her love and appreciation to the fire officers for their sacrifice and dedication. She kept in contact with WINN FM, questioning the officers’ safety, whether or not the officers were getting through with the extinguishing and if they were fed. She stated, “God is good. No life has been lost. We cannot bring back a life when one is lost, but a property can be rebuilt.”

Beatty also told WINN FM that she loves St. Kitts and Nevis and has donated lots of food and school supplies to many homes and schools on the island, during the past two years of the pandemic. These she said was transported from South Carolina where she is located currently.

Beatty has shared her intention to have an interview with WINN FM to speak more about the property and her humanitarian work on the island.

Meanwhile, investigations are being carried out to ascertain the cause of the fire. WINN FM will provide the details when it becomes available.