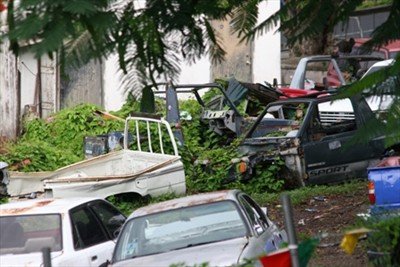 The Solid Waste Management Corporation and St. Kitts and Nevis Fire and Rescue Service officials addressed the impact of the fire hazards on the September 21 broadcast of Talking Trash on WINN’s Island Tea.

“Anything that is disposed [of] and how it is disposed [of] has the potential of being a fire hazard. As it relates to the derelict vehicle… [they] are an obstacle, they are an obstruction, especially when it comes to our response. It reduces our response time because it is probably left in an area where we cannot get to because this vehicle is there, it can’t move, it has no wheels. We have no devices or equipment that could move it at the time. And so, it becomes an obstacle. Sometimes, it is left to close a fire hydrant, so we can use the fire hydrant, and the next fire hydrant is like 500 feet away. So it takes more time, and it might be blocking the entrance to the property that we’re trying to get into so now we have to go over this vehicle. Okay, so the vehicle yes they do pose some challenges for us, in many instances,” explained Williams.

The officer said he could not recall an instance where a derelict vehicle caused such a delay that prevented clear passage by first responders.

However, he lamented the impact on the time it takes for Fire and Rescue to get to a fire, leading to more damage to properties.

Additionally, the derelict vehicles could contribute to the fire changing the nature of the fire being fought by the Fire and Rescue officers.

“They become more of a hazard when they are dumped in fields… When you have the derelict vehicle, dispose of the shrubs, and then you have a bushfire; now, this becomes involved in the file. And sometimes, the gas tank is still attached, and depending on how long the vehicle has been there, he may have fuel inside the tank still, which now poses a threat of explosion. So now we are at risk of becoming injured by flying pieces of metal, maybe from the tank or from the vehicle itself. So, that too, in that instance, the vehicle is a hazard because it changed the dynamics. We’re not just dealing with a bushfire; now, we’re dealing with a vehicle inside of the bushfire. So we have to be extra cautious now.”

Sergeant Williams said that white goods have a similar impact because of the coolants and other chemicals used in refrigerators, freezers and other white goods.

What suggestions do Fire and Rescue have to mitigate the illegal dumping of derelict vehicles, whites goods and other waste?

“What I’m thinking, I don’t know if it could be more of a community effort to get volunteers involved in the policing side of it… You live in the area; you look out for this area, you see anybody doing any illegal dumping, you don’t need to comfort them, just at least maybe you could get out the vehicle number, if you know who the person is, you can contact the police or Solid Waste and report it. Because at the end of the day, it is going to affect everybody. It is going to affect your children, your children’s children, and for me, I don’t want my children growing up in a dirty place. As a matter of fact, the area where they are dumping it is sometimes used by the safaris, [for] tourism, and if all I’m seeing is garbage, I’m not coming back. So it’s going to hurt everybody in the long run. So, I would recommend it if you could get some volunteers.”