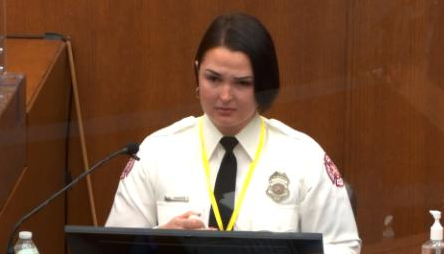 MINNEAPOLIS (Reuters) – A Minneapolis firefighter whose offers of medical aid to George Floyd during his deadly arrest last May were rebuffed by police was due to return to the witness stand on Wednesday in the trial of Derek Chauvin, the former policeman charged with Floyd’s murder.

The third day of testimony in the Chauvin trial comes after jurors on Tuesday heard a series of bystanders describe in searing detail how they watched Floyd’s arrest on May 25, 2020, and screamed at Chauvin to get off Floyd’s neck.

Among the witnesses on Tuesday was the teenager who recorded a video viewed by millions worldwide that shows Chauvin, who is white, using his knee to pin the neck of Floyd, a 46-year-old Black man in handcuffs, to the ground.

Darnella Frazier’s footage, which prosecutors say shows excessive force, led to one of the largest protest movements seen in the United States in decades, with daily marches against disproportionate rates of police violence against Black people.