First Match Of Esports Goes To Super Over 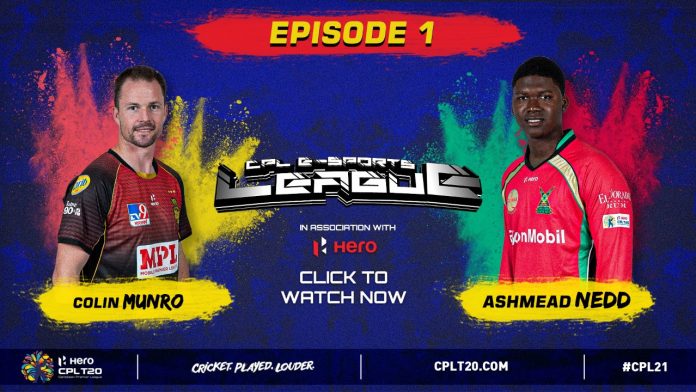 (Hero CPL0 – Guyana Amazon Warriors batted first and boundaries were flying immediately. Shimron Hetmyer kept the pressure on the bowlers as he dispatched three sixes but it was Brandon King who was the star player, making 74 (14).

It was left to Dwayne Bravo to bowl the last to try and keep the total down to something that his team could chase with Hetmyer on strike. He took up where King had left off as he too brought up a half-century, this one from 11 balls.

The Warriors closed their five overs with a score of 139/2 and with Munro a self-confessed novice at this game there were few who would have thought he would come close to winning this match.

It wasn’t the perfect start with the Knight Riders with Lendl Simmons going for 10 from the third ball of their innings. It was when Munro took control of himself that the fireworks started as he hit four sixes in his 25 off 6 balls.

TKR were still behind the rate, even after Sunil Narine hit the first five balls off a Romario Shepherd over and then more sixes coming from the bat of Kieron Pollard when he faced Imran Tahir.

Going into the last over the Knight Riders needed an improbable 35 to win the game. Darren Bravo made a mockery of that near-impossible target, hitting five sixes in a row before a four-tied the scores and took it to a Super Over.

Munro batted first in the Super Over and carried on where he had left off, smashing another 33 runs from his six balls with Pollard once again doing damage. That left Nedd’s side needing 34 to win.

As in the match itself, it came down to the last ball. Nedd needed a six to win it, anything else and Munro would beat his more experienced opponent. Nedd could only manage a four and it was Munro and his TKR team who emerged victoriously.

The full match is available to watch above and the YouTube link can be embedded into your website.

ABOUT THE HERO CARIBBEAN PREMIER LEAGUE:

First started in 2013, the Hero Caribbean Premier League (CPL) is a franchise-based T20 format cricket tournament that combines two of the most compelling aspects of Caribbean life – dramatic cricket and a vibrant Carnival atmosphere.

There were a combined broadcast and digital viewership of over 500 million during the 2020 season to make it one of the fastest-growing leagues in world cricket.

The 2020 tournament took place in Trinidad & Tobago between 18 August and 10 September. For further information visit www.cplt20.com