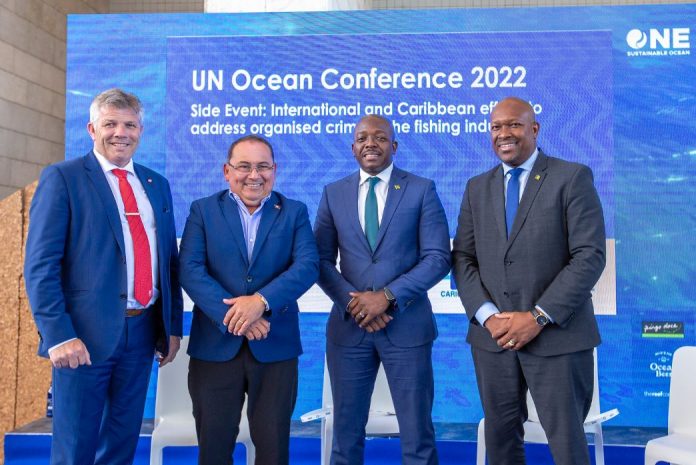 Belize City,  (CRFM)—Fisheries Ministers from across Member States of the Caribbean Regional Fisheries Mechanism (CRFM) issued a formal statement at the end of their 12th Special Meeting held on Friday, 7 October 2022, announcing a year-long celebration in 2023, to observe the 20th Anniversary of the CRFM.

The celebration will showcase the vital contributions of fisheries and aquaculture to the regional and national economies, and to food and nutrition security, livelihoods, job creation, trade, and blue economic growth.

In their deliberations today, the Ministerial Council of the CRFM also took some important decisions to, among other things, advance small-scale fisheries and aquaculture in the region, in collaboration with fisherfolk organizations as well as regional and international development partners and donors.

The full Ministerial Statement on the CRFM’s Anniversary celebration appears below:

The Ministerial Council of the Caribbean Regional Fisheries Mechanism (CRFM)—comprised of Ministers responsible for Fisheries across the Caribbean Community (CARICOM)—meeting at their 12th Special Meeting held on Friday, 7 October 2022, hereby declare that 2023 shall be observed and celebrated as the 20th Anniversary of the CRFM.

The Fisheries Ministers note that 2023 will mark 20 years since the CRFM was officially inaugurated as a specialized, inter-governmental CARICOM Regional Institution to “promote and facilitate the responsible utilization of the region’s fisheries and other aquatic resources for the economic and social benefits of the current and future population of the region.”

In this regard, the Ministerial Council reaffirms its full support for the CRFM@20 Action Plan and calls upon the CRFM Secretariat, the Caribbean Fisheries Forum, the CARICOM Secretariat and our regional and international development partners and donors to support its implementation.

The Ministers note that the CRFM’s 20th Anniversary campaign will focus on the CRFM’s achievements over the past two decades and inspire a fresh vision for the future of the fisheries and aquaculture sector, while seizing new opportunities for maximizing the benefits of the Blue Economy for sustainable development of our countries and the welfare of our people.

The Fisheries Ministers underscore the important value of the fisheries and aquaculture sector in the regional and national economies of CARICOM, and the critical importance of its contributions towards achieving the mandate issued by the CARICOM Heads of Government at the Thirty-third Inter-Sessional Meeting of the Conference, to reduce the region’s food import bill by 25% by 2025.

The Ministers also emphasize the sector’s unique role in sustainably harnessing the vast and diverse wealth of the Blue Economy. This unparalleled value of the sector will be brought into focus during the CRFM’s Anniversary Celebrations, with special emphasis on sustainable livelihoods and employment, food security and nutrition, and domestic and foreign trade.

The Ministerial Council of the CRFM unreservedly reiterates its full support for all activities outlined in the CRFM@20 Action Plan, including the 3-day Scientific Conference and series of webinars on important topical issues on fisheries, aquaculture and blue economic growth which the CRFM will convene as a part of the CRFM’s 20th Anniversary celebrations, to highlight the scientific contributions of the CRFM, its Member States, and regional and international partners, to the advancement of the sector.