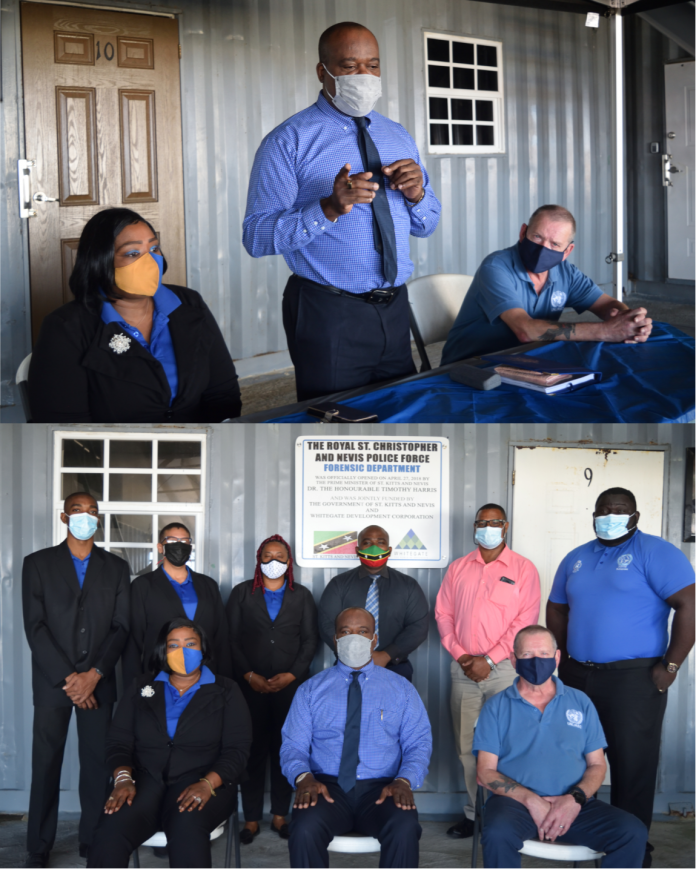 The training is being held at the Forensic Department’s Lab in Tabernacle and is being facilitated by Firearm, Gunshot Residue and Tool Mark Expert, Phillip Boyce, from the United Kingdom. Mr. Boyce is also a Forensic Scientist. The week-long workshop was made possible through assistance from the United Nations Regional Centre for Peace, Disarmament and Development in Latin America and the Caribbean (UNLIREC).

Assistant Commissioner of Police (ACP) with responsibility for the Crime Directorate and National Focal Point for UNLIREC, Andre Mitchell, officially declared the training open at a brief soft ceremony Tuesday morning. ACP Mitchell said that the training was important as the UNLIREC pursued its strategic goals, and that it was more valuable to do it with the trainer on site.

“UNLIREC wants to achieve four goals by the year 2030…so this training is part of that, I think it’s goal two, to reduce illicit trafficking of firearms and ammunition. It also borders on goal three of UNLIREC which is to bolster law enforcement capacity to deal with illegal firearms and ammunition,” ACP Mitchell said.

“So, I’m very happy today that we are not only putting on the training, but that we are putting on the training in person. I think that Mr. Boyce would have alluded to that part. That some of the training was done virtually by zoom…but he’s here in person, which means you will be benefitting from some hands-on training which increases the value of training. When something is done virtually, there are a number of restrictions, but Mr. Boyce is here so you are able to benefit from whatever the application of the skills that Mr. Boyce has and is willing to share with you.”

He implored them to take the training seriously, adding that it was quite possible that they might be called upon to assist with training in that area in another territory in the region.

Director of the Forensic Department, Latoya Lake-Marshall, had similar sentiments. She told the members of her staff that they should broaden their minds to think about serving the region, just as they are serving their country.

“Most of you here are at a stage in your career where a lot would be expected of you, both from the Commissioner of Police and the High Command, myself as your director, the citizens of St. Kitts and Nevis and the region at large. The reason why I say the region at large is because I would be expecting that within a certain amount of time, you would be at a standard where you would be able to serve the region and not just internally within the Federation…As you noticed, the crime directorate has aimed for the best to train you and this doesn’t mean you must be good within the training, you’re supposed to let that shine within your everyday work,” said Mrs. Lake-Marshall.