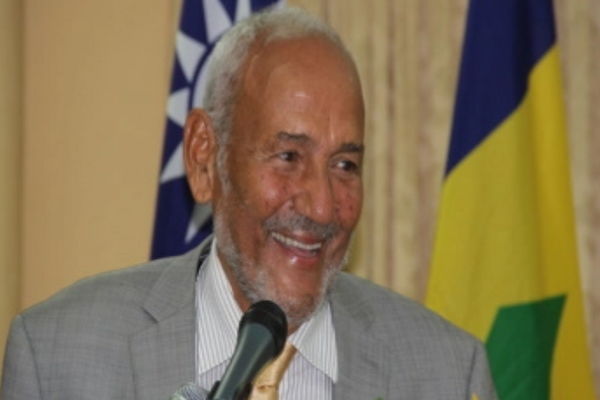 (CMC) Former prime minister Sir James Mitchell has been hospitalised here after experiencing difficulty urinating and having some abdominal pain that he at first thought was associated with food poisoning.

Sir James, 90, the only parliamentarian at the attainment of independence on October 27, 1979, who is still alive, was reported to be in a stable condition at the Milton Cato Memorial Hospital where he was brought to from the northern Grenadines island of Bequia to Kingstown, by the Coast Guard on Saturday,

“I have never hid my condition from the people of St. Vincent and as you know, I have always been reporting how I am feeling well and swimming and all of that,” Sir James told the Caribbean Media Corporation (CMC) by telephone on Sunday night, adding that he had taken a fall four months ago and while he suffered no broken bones, he had been experiencing some health challenges since then.

He said he had been receiving medical attention from a private facility in St. Vincent as well as being attended to by a Cuban physician who “has given brilliant service and attention” at the Port Elizabeth Hospital.

“But then I began to have difficulty urinating and he then realised that there was something else wrong. And over the last weekend, I began to get some abdominal pain,” Sir James said, adding that he thought he was experiencing food poisoning.

One of his daughters he started vomiting and was taken to a hospital where an ultrasound found that he had a gall bladder stone. But the doctors concluded that it was not an urgent matter for which surgery was required.

“Everybody was thinking that that (the gall bladder stone) was the reason for the pain. It turns out it was not,” the relative said, adding that he started vomiting again and it was felt that he needed emergency surgery with the gallstone.

The former prime minister said he is still having difficulties urinating and has an enlarged prostate.

“And that is actually the issue that is causing the concern at the moment,” Mitchell said, adding that a urologist had attended to him on Sunday.

“I got some very good attention from at the Milton Cato Memorial Hospital,” Sir James said, adding that seven doctors had attended to him.

“I keep commenting on my extraordinary health at the age of 90, but it is amazing to see how one fall can push you in a totally different direction,” Sir James said and that there has also been an outpouring of love and support from people and he is very grateful for their messages and prayers.

Sir James, an agronomist and hotelier, was prime minister of St. Vincent and the Grenadines from 1984 to October 2000, five months before his New Democratic Party was voted out of office. He quit electoral politics before the March 2001 general elections.

He is the only parliamentarian at the attainment of independence on October, 27, 1979 who is still alive.