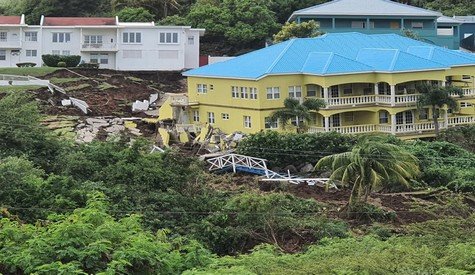 St Kitts and Nevis (WINN): The owner who has lost his property on Fort Tyson Rise in Frigate Bay after its foundation shifted and the house began to move to the edge of the hill is thankful that no one was injured in the incident.

Owner of Construction Group Rock and Dirt Mr. Alexis Hazel, told WINN FM Friday, that he will not rebuild there.

NEMA responded to reports of significant cracks in multi-storey building on Thursday. The Director of Public Works Mr. Cromwell Williams offered this situation report Thursday night after top officials visited the scene, implemented measures to control traffic and movement, and then evacuated the area.

Alexis Hazel tells WINN about losing his house at the Fort Tyson Rise in Frigate Bay on St. Kitts.