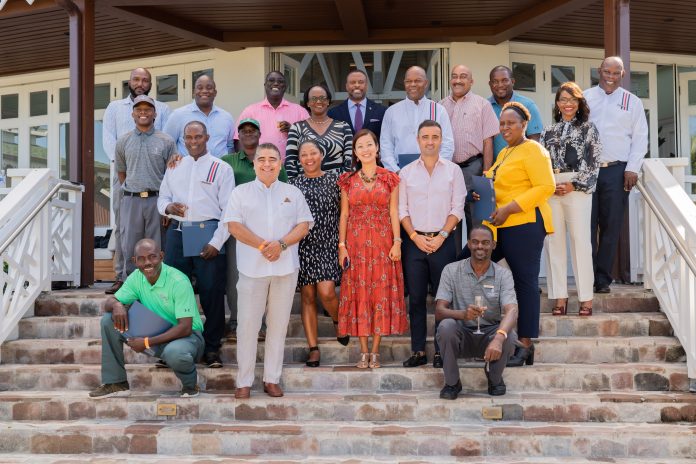 St. Kitts and Nevis (WINN) — To mark the 30th anniversary of the Four Seasons Resort Nevis, a staff recognition ceremony was held at the Resort’s Lobby area to honor 12 of its most committed workers.

Ten of the employees began working for the Resort 30 years ago and were presented with a certificate of appreciation. The other two were recognized as employees of the year.

Employees of the year, Sylvester Pemberton and Haile Nisbett were also recognized for their contribution to the Four Seasons family.

Regional Vice President and General Manager, Mrs. Yvette Thomas-Henry in her remarks at the auspicious event said the Resort, over the past 30 years, has been known for its excellent hospitality.

“For the past three decades, the Four Seasons Resort Nevis has been delivering authentic Caribbean luxury with genuine Nevisian hospitality, and today, the Resort remains the shining jewel within the Four Seasons crown. The Resort has remained a favorite of many of our returning guests while also continuing to evolve…,” said Mrs. Thomas-Henry.

Also present at the ceremony was Premier and Minister of Tourism, the Hon. Mark Brantley. Premier Brantley used the opportunity to highlight the significant economic contribution the company has made to the island of Nevis.

“You have survived [Hurricane] Hugo, subsequent hurricanes, you have survived shutdowns, and now of course the world is encountering COVID-19, and I’m confident that you will survive that as well”. Premier Brantley said.

Isadore Sharp is the founder and owner of the Four Seasons Hotels and Resorts brand. The Nevis property was opened on February 14, 1991, after 18 months of construction.

Brantley further stated that “All of you…who perhaps have earned a living here, the government that earns a living as well because Four Seasons is significant…as you say if Four Seasons goes, the island goes because the truth be told we have suffered tremendously because of the decline in tourism”.

The Resort’s management team and other staff members as well as members of the media were also present at the event.