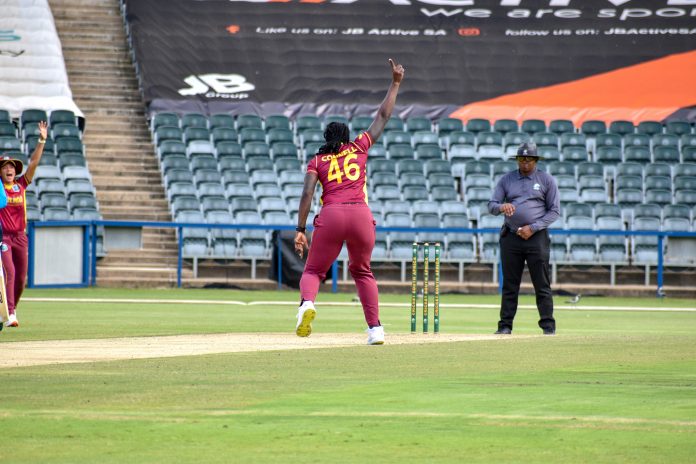 JOHANNESBURG, South Africa- West Indies Women opened their tour to South Africa on winning note when they defeated a South Africa Women’s XI by 53 runs in a warm-up match at the Imperial Wanderers Stadium in Johannesburg.

Batting first West Indies Women posted 202 all out from 46.5 overs. Shemaine Campbelle top-scored with 42 off 48 deliveries, which included 5-fours, followed by Rashada Williams with 30 off 73, inclusive of 3-fours. Nadine de Klerk returned the best bowling figures for the South Africa Women’s XI with 7-0-27-3, followed by Tumi Sekhukhune with 5-1-20-2.

Tazmin Brits and Delmari Tucker top-scored for the South Africa Women’s XI, with 32 and 24 respectively. Bowling for West Indies Women, Cherry Ann Fraser caused a middle order collapse in her spell, finishing with 4-0-11-3. While Shamilia Connell wrapped up the innings with 2-0-13-2 and a direct-hit run out.

West Indies Women’s Head Coach Courtney Walsh was pleased with the performance but says the preparations are not completed with a win. Walsh said, “I thought the girls did well, it was good to get out in the middle and play today. We haven’t played a lot of cricket of late so even though it was a practice match, the atmosphere and the execution was pretty well. Most of the girls had decent knocks and a decent bowl as well. What I was most impressed was the two Super-Over practice scenarios we had as well, with how precise and good the execution was. This win will give us confidence going into the series (yes) but also for the World Cup.”

West Indies will return to the Imperial Wanderers Stadium on Friday January 28 for the first of four One Day Internationals against South Africa Women. It is a day/night fixture with first ball at 2 pm (8 am Eastern Caribbean/7am Jamaica).