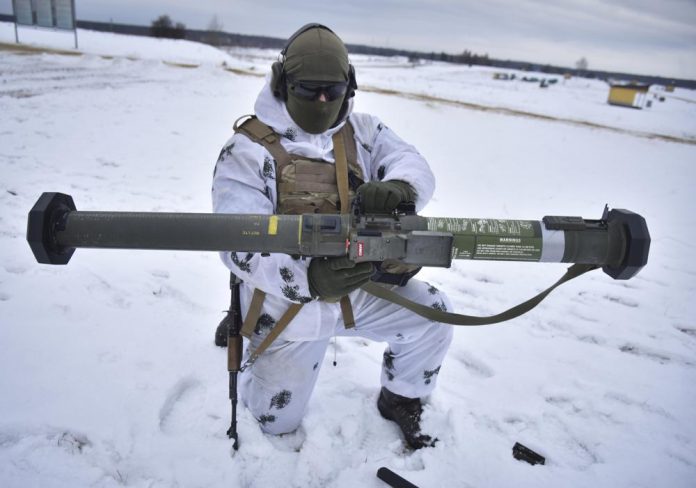 PARIS (AP) — The French president and the German chancellor will head to Moscow and Kyiv in the coming weeks, adding to diplomatic efforts to try to deter Russian President Vladimir Putin from launching an invasion of Ukraine and find a way out of the growing tensions.

France’s Emmanuel Macron is scheduled to visit Moscow on Monday and Kyiv on Tuesday, while Germany’s Olaf Scholz will travel to Kyiv on Feb. 14 and Moscow on Feb. 15.

The high-level visits come as China has backed Russia’s demand that NATO be precluded from expanding to Ukraine, and after the U.S. accused the Kremlin on Thursday of an elaborate plot to fabricate an attack by Ukrainian forces that Russia could use as a pretext to take military action. The U.S. has not provided detailed information backing up the claims, which Moscow has vehemently denied.

While France is a major player in NATO and is moving troops to Romania as part of the alliance’s preparation for possible Russian action, Macron has also been actively pushing for dialogue with Putin and has spoken to him several times in recent weeks. The two will hold a one-on-one meeting Monday, Macron’s office said Friday.

Macron is following a French tradition of striking a separate path from the United States in geopolitics, as well as trying to make his own mark on this crisis and defend Europe’s interests.

Germany has emphasized the importance of various diplomatic formats in tackling the tensions and has refused to send weapons to Ukraine, irking some allies. Scholz also has faced criticism at home lately for keeping a low public profile in the crisis.

After weeks of talks in various diplomatic formats have led to no major concessions by Russia and the U.S., it’s unclear how much impact the trips will have. But Ukraine’s Foreign Minister Dmytro Kuleba said Friday that “top-level visits seriously reduce challenges in the sphere of security and upset the Kremlin’s plans.”

In a call Wednesday with U.S. President Joe Biden, Macron filled him in on his diplomatic efforts. In talks with the Russian and Ukrainian leaders Thursday night, Macron’s office said they discussed ways to “identify elements that could lead to de-escalation,” and “conditions for strategic balance in Europe, which should allow for the reduction of risks on the ground and guarantee security on the continent.”

Scholz has a previously planned meeting with Biden in Washington on Monday.

Moscow has been signaling an apparent readiness for more talks with Washington and NATO in recent days. Some experts say that as long as Russia and the West keep talking, that’s a reason for cautious optimism.

Russia has amassed more than 100,000 troops near Ukraine’s northern and eastern borders, raising concern that Moscow might invade again, as it did in 2014. The troop presence and uncertainty have unnerved Ukrainians and hurt the country’s economy.

The Kremlin has denied that an invasion is planned and has demanded guarantees from the West that Ukraine will never join the bloc, deployment of NATO weapons near Russian borders will be halted and the alliance’s forces will be rolled back from Eastern Europe.

China lent its support to the demands Friday after Putin met with Chinese President Xi Jingping in Beijing before the opening of the Winter Olympics. After the talks, the two leaders issued an elaborate joint statement, declaring their opposition to any expansion of NATO.

“The Chinese side is sympathetic to and supports the proposals put forward by the Russian Federation to create long-term legally binding security guarantees in Europe,” the statement read.

“Unfortunately, the West has not contributed anything toward a solution of this issue,” Erdogan said. “They are just creating obstacles.”

Meanwhile in Washington, U.S. officials said a plan for a fake attack on Russian territory or Russian-speaking people was described in declassified intelligence shared with Ukrainian officials and European allies in recent days. It was the latest example of the Biden administration divulging intelligence findings as a tactic to stop Russian disinformation efforts and foil what it says is Putin’s attempt to lay the groundwork for military action.

Russian officials have rejected the allegations. Foreign Minister Sergey Lavrov on Friday spoke about the “absurdity” of the claims, and Kremlin spokesman Dmitry Peskov recommended reporters “not to take anyone’s word for it, especially the (U.S.) State Department’s, when it comes to these issues.”

Ukraine’s foreign minister said Friday that Washington shared the information with Kyiv and that it did not surprise Ukrainian authorities. “Since 2014, we have seen many insidious actions by Russia. We have seen that nothing stops them from fabricating something and accusing Ukraine of something,” Kuleba told reporters.

In recent weeks, the White House has said that U.S. intelligence shows Russia has launched a malign social media disinformation campaign against Ukraine and has dispatched operatives trained in explosives to carry out acts of sabotage against Russia’s own proxy forces. Britain has divulged intelligence findings that it says show Russia plotting to install a pro-Russian puppet government in Ukraine.