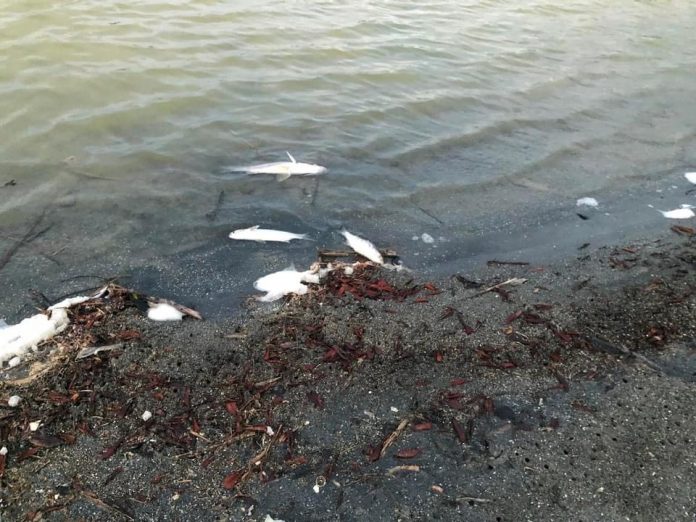 St Kitts and Nevis (WINN): The Frigate Bay Pond in St Kitts is yet again in question, as there have been frequent sightings of dead fish at the littoral zone of the pond.

Fish kills at the Frigate Bay Pond are not unusual. Several persons said this has been ongoing for years, but a comprehensive report has not been given on the situation.

Social Commentator and Author Micheleina Charles-Hazel shared on social media that while she was walking in the area of the Frigate Bay Pond, she saw two dead fish and as she got closer, she recognised that the pond was lined with more. She therefore questioned the cause of the situation.

Mr. Glenroy Blanchette, a former Politician and Educator suggests via social media that “the main cause of the fish kills is suffocation, due to a lack of dissolved oxygen in the ponds. Occasionally, there is a die-off of algae in the pond which leads to a rapid decline of dissolved oxygen, as bacteria decompose the dead algae. This normally happens during a prolonged period of hot weather.”

WINN FM Contacted the Department of Environment on whether the claims can be substantiated.

A senior officer in the Department of Environment indicated that various matters can cause fish in the pond to die, including changes in atmospheric conditions, as well as waste that enters the pond.

When asked if fish from the Frigate Bay Pond are good for consumption, the environmentalist said no; whilst hoping that individuals are not fishing there. He said he believes that a drain may be running into that pond.

The sizes of the fish also came into question and the environmentalist shared his belief that the fish have grown so large because there might be little to no human interference.

Meanwhile, another social commentator suggests that if chemicals are killing these fish, the matter needs to be investigated.