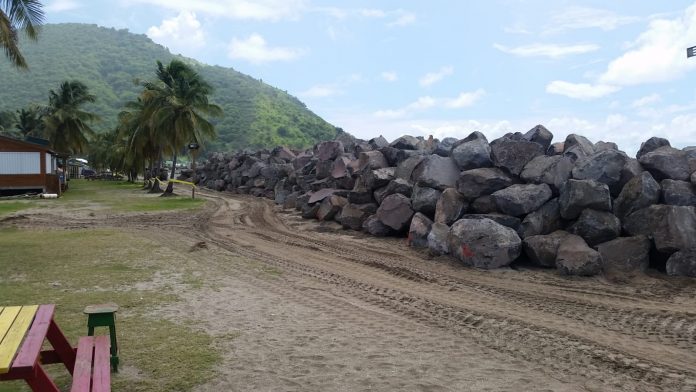 St Kitts and Nevis (WINN): A multi-million beach expansion project now underway at Frigate Bay, in the area popularly known as The Strip, is set to expand the beach and bolster economic activity in the area.

Minister of Tourism Lindsay Grant told media gathered at the Strip that Frigate Bay that the intention was to preserve one of the country’s iconic beaches.

” We have Rock and Dirt, and on the beachside of the program, we have Marine Works… it’s really all local entrepreneurs, Grant said.

The three-step project involves a breakwater, three groynes and a beach nourishment exercise.

The offshore breakwater aims to attenuate the wave energy in the central and southern portions of the beach.

The groynes interrupt water flow and limit the movement of sediment. The beach nourishment involves the pumping of sand to widen the beach to about 50 meters.

Rock and Dirt delivers two and three-ton stones to the drop site, at the northern end of the beach, and they are placed in a wash pit to remove mud and debris before they are moved and stockpile before being taken out to sea.

Reggiewell Francis, the owner of St. Kitts Marine Works, told WINN that the rocks would be used to create a submerged breakwater.

” …so when that’s completed …our dredging now will be pumping sand onto the beach to stockpile and then Rock and Dirt will spread it. So then the entire beach would be usable. At present the middle portion of the beach has a reef in it, so many people don’t swim there, so we will be pumping quite a bit of sand on to cover the entire area,” Francis told WINN.