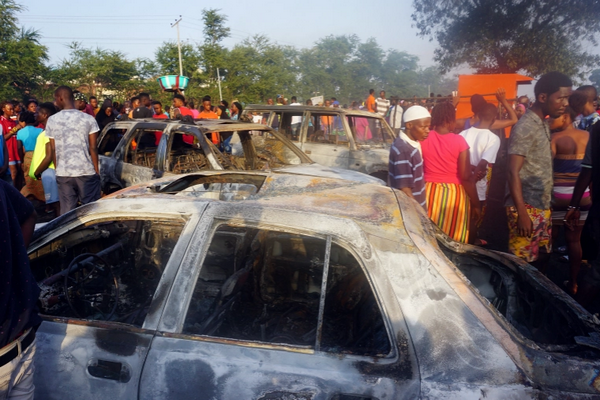 (Al Jazeera) A fuel tanker has exploded following a collision in the capital of Sierra Leone, Freetown, killing at least 99 people and injuring dozens of others, officials said.

The explosion took place late on Friday after a vehicle struck the tanker in Wellington, a suburb just to the east of Freetown.

The death toll on Saturday afternoon stood at 99, with more than 100 people being treated in hospitals and clinics across the city, deputy health minister Amara Jambai told Reuters news agency.

Victims included people who had flocked to collect fuel leaking from the ruptured vehicle, Yvonne Aki-Sawyerr, mayor of the port city, said in a post on Facebook.

The extent of damage to property was as yet unknown, the mayor said, adding that police and her deputy were at the scene to assist disaster management officials.

“We’ve got so many casualties, burned corpses,” said Brima Bureh Sesay, head of the National Disaster Management Agency, in a video from the scene shared online. “It’s a terrible, terrible accident.”

Omar Fofana, a journalist speaking from the scene of the explosion, told Al Jazeera that dozens of people have admitted at various hospitals.

Health services have been stretched, with hospitals “asking for everything that they need to be able to respond,” he added.

Fofana said that many people were sitting in heavy traffic when the explosion happened.

“Many of those who died, or were burned, were burned inside their vehicles,” he said.

According to Fofana, an emergency response meeting is expected to take place later on Saturday, which will be chaired by the country’s vice president.

President Julius Maada Bio, who was in Scotland attending the United Nations climate talks, deplored the “horrendous loss of life”.

“My profound sympathies with families who have lost loved ones and those who have been maimed as a result,” he wrote on Twitter.