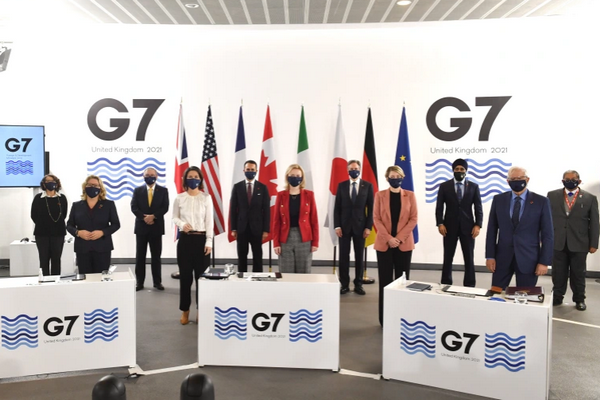 There was a “very much a united voice from the G7 nations who represent 50 percent of global GDP, being very clear that there will be massive consequences for Russia in the case of an incursion into Ukraine”, Truss said on Sunday at the meeting in the northern English city, Liverpool.

Ukraine is at the centre of a crisis in East-West relations as it accuses Russia of massing tens of thousands of troops in preparation for a possible large-scale military offensive.

US intelligence assesses that Russia could be planning a multi-front offensive on Ukraine as early as next year, involving up to 175,000 troops.

The Kremlin denies it plans to invade and says the West is gripped by Russophobia. Moscow says the expansion of NATO threatens Russia and has contravened assurances given to it as the Soviet Union collapsed in 1991.

London was considering all options on how to respond if Russia invades Ukraine, Truss said, highlighting that the UK has used economic sanctions in the past to send diplomatic messages to Moscow.

“When the UK has wanted to send clear messages and achieve clear goals we have been prepared to use economic sanctions,” Truss told reporters. “We are considering all options.”

A joint statement was expected later. In a draft statement seen by the Reuters news agency, the G7 delegates said they were united in their condemnation of Russia’s military build-up near Ukraine and called on Moscow to de-escalate.

“Russia should be in no doubt that further military aggression against Ukraine would have massive consequences and severe cost,” the statement said.

“We reaffirm our unwavering commitment to Ukraine’s sovereignty and territorial integrity, as well as the right of any sovereign state to determine its own future,” the draft said.

Al Jazeera’s Rory Challands, reporting from Liverpool, said Moscow might not be moved by the threats from the G7.

“The G7 is a loosely affiliated club. It is not something that can crank up or dial down pressure as a collective organisation,” Challands said.

“These foreign ministers will be going back to their respective countries and talking with their leaders about sanctions and punitive measures. But those [measures] will come from individual countries. Not from a strongly worded communique,” he added.

“On China, we discussed a range of issues and challenges, such as the situations in Hong Kong and Xinjiang, in the East and South China Seas and the importance of peace and stability across the Taiwan Strait,” it said. “We also expressed our concern about coercive economic policies.”

The G7 comprises the UK, France, Germany, Italy, Japan, Canada and the United States, and includes a representative from the European Union.