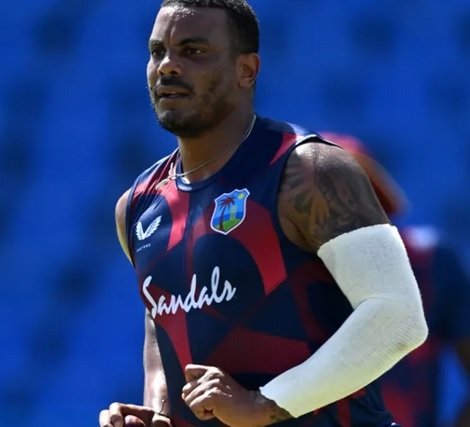 (ESPNcricinfo) – Shannon Gabriel could play his first Test in over a year after being recalled for West Indies’ Test squad to tour Zimbabwe later this month. Spinners Jomel Warrican and Gudakesh Motie will also come back into contention after being included in the 15-man party.

Gabriel, 34, last featured in the Test side in Sri Lanka in November 2021. He was subsequently sidelined by a hamstring injury, and spent much of last year working to regain fitness; he had a spell in county cricket with Yorkshire and finished joint-leading wicket-taker in the Super50 Cup but was overlooked for West Indies’ Test tour of Australia.

However, with Jayden Seales rehabilitating after knee surgery, Gabriel could be reunited with Kemar Roach and Jason Holder in the West Indies seam attack.

Warrican also played the last of his 13 Tests in Sri Lanka in 2021, while Motie could add to the sole cap he won against Bangladesh in June last year. West Indies were hit by numerous injuries during their 2-0 defeat in Australia, and have omitted Shamarh Brooks, Anderson Phillip and Marquino Mindley, all of whom played in the second Test in Adelaide.

“This is the start of the international calendar for 2023 and we will hope to start with a win,” Desmond Haynes, West Indies’ lead selector, said. “We appreciate it won’t be an easy assignment as Zimbabwe, like most other teams in world cricket, play very well on their home soil on pitches that will support their style of play.