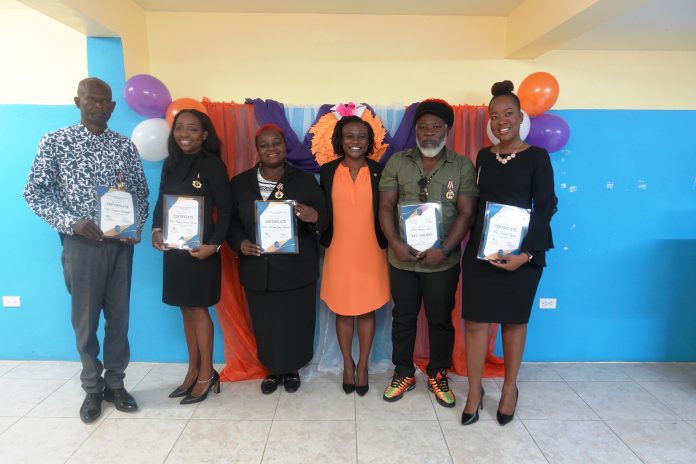 (Press release) Five ‘Gender Champions’ were recognized for their advocacy, volunteerism and provision of services to address the issue of gender-based violence, during a special Induction Ceremony held on Tuesday, December 6th, at the Early Childhood Unit Conference Room, Victoria Road and hosted by the Department of Gender Affairs.

The Event was held as part of the currently-running 16-Day Campaign against Gender-Based Violence, which will be observed until December 10th under the theme “Unite! Activism to End Violence against Women and Girls”.

In giving welcome remarks, Senior Gender Field Officer, Ms. Shinnel Charles, noted that the annual 16-Day Campaign provides opportunities for collaborative efforts to bring into the spotlight the serious nature of violence against women and girls, and thanked the honourees for their tireless work in that regard, particularly by providing pro bono legal services, sheltering victims of domestic violence, serving as male mentors, and even doing carpentry work for the Department’s awareness activities. “From bargaining with service providers to pledging for employment…too much to mention, too much to repay, today we say thank you for your hard work and dedication”, she said.

In other appreciative remarks, Permanent Secretary of Social Development & Gender Affairs, Ms. Azilla Clarke, noted that the ‘Gender Champions’ played a critical role in creating a climate of change and advocacy while the Honourable Isalean Phillip -Junior Minister of Social Development & Gender Affairs, informed that the public doesn’t often get to see the victims and volunteers of domestic violence, but that the work on that front was very much appreciated, so that the Federation could achieve its aspirational goal of gender equality.

The ‘Gender Champions’ were then announced with a reading of their profiles. They are:

The five partners will be inducted into the ‘Gender Champions Wall of Fame’ (as the first cohort), to be prominently displayed at the Office of the Department of Gender Affairs, Victoria Road.

As the 16-Day Campaign winds down, the Department will stage its final awareness activity on the afternoon of Friday, December 9th with a Silent Protest of male victims of Domestic Violence, throughout the streets of Basseterre.