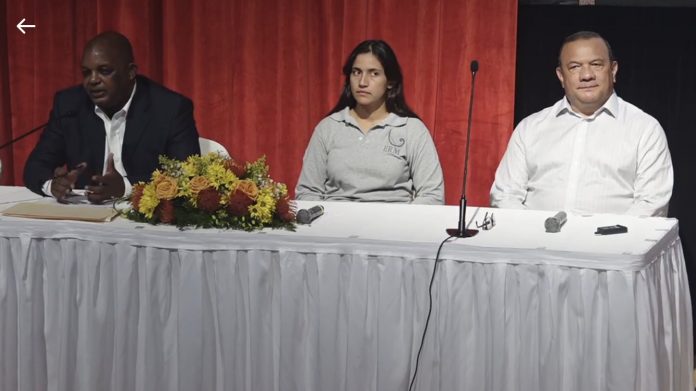 St. Kitts and Nevis (WINN): The General Manager of the Nevis Electricity Company (NEVLEC) Mr. Albert Gordon prides Nevis as the most resourceful country in the world yet to produce Geothermal Energy.

Speaking at a Public Consultation on November 18, 2022, Mr. Gordon said based on assessment, it is timely that Nevis takes advantage of its resources, especially considering “the desire to fight climate change and the potential that the resources can bring to not just evolve the energy sector in St. Kitts and Nevis but to also play a significant role in regional and even global transition to greener fuels and more climate friendly economies.”

According to Gordon, the estimated capacity of the resource has far outstretched the current demand for St. Kitts and Nevis.

“So as far as this project is concerned, we’re looking to initiate the development of the geothermal resource. The estimated capacity that we could derive from this resource is over 1,000 megawatts. When you take that into consideration and compare that with the demand for electricity in Nevis and St. Kitts, we’re talking about 10 megawatts in Nevis and 30 megawatts in St. Kitts, so [that’s] 40 megawatts and so, the resources far outstrip the current demand.”

The Manager of NEVLEC disclosed that the electricity companies in the Federation are currently spending millions of dollars to import diesel, whereas a successful development of Geothermal energy can provide a greater opportunity for exportation of the energy resource to neighbouring islands.

“Nonetheless we’re looking to develop the resource to the fullest potential for a number of reasons. There’s a possibility of exporting power firstly from Nevis to St. Kitts so there’s an accompanying project to the Geothermal Development Project which is the development of high voltage transmission network linking both islands and also providing support within each island so we can move bulk power more efficiently, more reliably and with more resilience across the islands and within the islands. So this is the first phase of what is going to be a major transition of the energy sector where we move from being a net importer of energy.”

Gordon further explained “Currently at NEVLEC, we are spending about EC $4,000,000.00 on diesel imports and St. Kitts is spending about three times that. So with the development of this resource we’ll be able to, not only to avoid those imports but to become a net exporter of electricity and cheap renewable electricity; as well as what is now one of the accepted means of decarbonising the different sectors globally, the production of green hydrogen and the derivatives are from green hydrogen. So we are uniquely positioned to become a net exporter and to exceed our demand in terms of production from renewable resources.”

Gordon highlighted that good technical capacity is important when embarking on Geothermal Energy projects. Thus, informed that technical support will include specialists from the electricity companies in St. Kitts and Nevis.

“In order to get the project going, we have to have a number of things in place. First, we need very good technical capacity and we have put that in place with the support of the Inter-American Development Bank and the Caribbean Development Bank. So, we have a very good technical team with drilling engineers with several years experience, geologists and other specialists in Geothermal power development working with Nevis and the project team to ensure that we evolve the project in the safest and best way possible to achieve the objectives at the best possible cost for consumers. So, that team is in place now, supporting a project management unit which involves our best technical people both from SKELEC and NEVLEC along with other specialists within the country. Aside from benefiting from that compliment of capacity from external and internal, we’ll also be facilitating the development of the local capabilities so we can keep developing the resource going forward and be better able to manage the sustainability of the resource.”

“Aside from the technical capacity that we have in place we have also sought to get the best financing for the project to ensure that the financial risks are properly managed and we’re getting a cost of capital that is as low as possible so that we can translate that into lower tariffs for consumers. So in this respect the Caribbean Development Bank with the Inter-American Development Bank is providing what is called a “Contingently Recoverable Grant” and how this works is that if we drill the wells and the wells are not productive then we don’t have to repay those funds. If they are productive, then we take out that grant with a concessional loan and we expect additional concessional financing for the development of the wells but also for the financing of the power plant.”

Gordon explained, “Based on the expectations for the construction of the power plant, based on discussions with the different manufacturers, we think we can have a plant in place 18 months after we have signed a contract; which we hope to have in place shortly after we have completed the wells and tested them.”

Meanwhile, Mr. Gordon said the process has started for the procurement of a drilling engineer, with the expectation that an engineer will be confirmed by January and drilling expected to commence by June 2023. The General Manager also mentioned that by 2025, Nevis will be producing its first set of Geothermal energy.