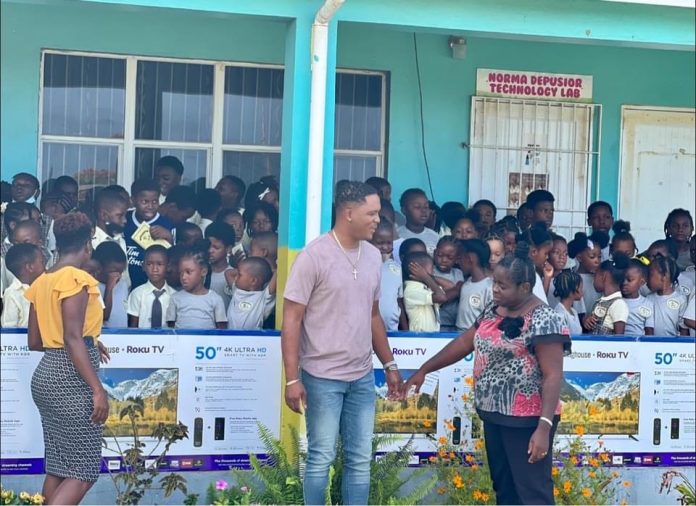 St Kitts and Nevis (WINN): Glenroy Marshall also known as Kyle Marshall has given a significant donation to his alma mater the Bronte Welsh Primary School.

Marshall donated four 55 inch televisions, one for each class at the school. The televisions are an asset to the school, as they are necessary for carrying out the lessons in the new curriculum which has to be accessed online occasionally.

During the handover ceremony, the school’s Principal Valdine Rogers mentioned that whilst visiting the school on a previous occasion, Marshall recognised that televisions were being shared amongst the classes and made a pledge to get more televisions to change that situation.

Marshall during the ceremony shared an inspiring message to the student body. He said “any of you here as students can have a bright future. It doesn’t matter where you are now, it’s about where you end up or where you are going. Yesterday is already gone. Don’t look at yesterday; look at today and you look at tomorrow. Enjoy every moment that you have now and move forward with that.”

In addition Marshall also known as Kyle said he made a decision a few years ago to give back to the community and therefore chose the school as a start to new beginnings. He also declared that for each graduation going forward, the school can call on him to assist in any regard and he will certainly do the best that he can.

Education Officer Valarie Richardson Mason who was also present at the ceremony expressed gratitude to Marshall on behalf of the Bronte Welsh Primary School and by extension the Ministry of Education. She told the students that the size of the tv is enough to show them that Marshall’s love for the school is very big.

The smiles and cheers from the students was a sign that they are appreciative of Marshall’s contribution to the school.