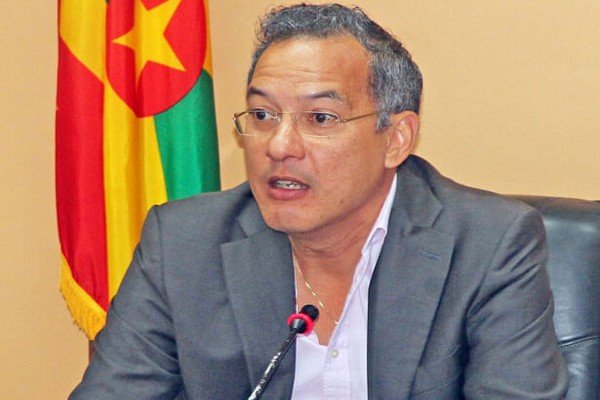 ST GEORGE’S, Grenada, CMC – Grenada’s Health Minister Nickolas Steele says he is prepared to suffer the financial consequences after he was photographed recently in the company of American actor and martial artist Steven Seagal not wearing a mask in contravention of the regulations aimed at curbing the spread of COVID-19.

Steele told reporters that he is aware that the photograph may send a different message to the population whom health officials, including himself, have been urging persons to wear the mask and adhere to the other protocols such as social distancing to prevent the spread of the virus that has killed one person and infected 230 others since March last year.

“I had a conversation with the Commissioner of Police and as far as I am concerned there is public evidence that I was not wearing a mask and I await my ticket, I will pay my charge,” Steele told reporters at the weekly post-Cabinet press conference.

“The law and the regulations we put out there are for everybody and those who were in the vehicle are going to do the same. The law is for everybody.

“I will pay my charge. I will receive my ticket for not wearing a mask in public. And we will move forward and I expect any and everybody else to follow by example as well. It has been 15 months that we all have been dealing with this (COVID-19) and yes I dropped my guard, I wasn’t wearing my mask, therefore, I will pay the consequences,” Steele added.

Under the regulations, no person without reasonable excuse should be in a public space without wearing a face mask, or a face covering in a manner that covers his or her mouth, nose and chin.

The regulations allow for the person on summary conviction to be liable to a fine not exceeding EC$500 and to imprisonment for a term not exceeding 12 months.

It also makes provision for a person who commits an offence to be liable on service of a fixed penalty notice by a police officer, if the person so chooses to a fixed penalty of EC$350.

Steele was not the only government minister photographed with Seagal without a mask.

The Ministry of Culture and Arts, in a Facebook post published on August 20, had a photograph with Minister Yolande Bain-Horsford and Permanent Secretary Michael Stephen in a photo-op with the Hollywood actor.