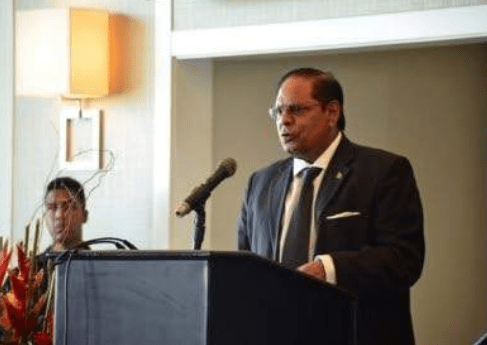 The prime minister, who was a guest on a local radio show on Wednesday, made reference to a statement issued by Mottley, expressing concern with the reports submitted by Chief Elections Officer of the Guyana Elections Commission (GECOM) Keith Lowenfield to the commission.

Nagamootoo reminded that following the country’s General and Regional Elections on March 2, the Chair and other Caricom heads of government intervened to ensure there was a recount of the total votes cast.

An order was gazetted and a Caricom observer team was facilitated to oversee the recount.

“There was a three-member scrutineer team in Guyana, they had conducted limited scrutiny of the ballots and submitted a report,” he remarked and further pointed out that the report also highlighted several anomalies unearthed during the recount.

The prime minister said that the statement by Prime Minister Mottley relied on the recount without the figures produced being reviewed despite the Caricom team’s report indicating that “it was not just a mere recount but an audit, like a forensic audit looking at everything”.

He noted that while Mottley is entitled to her opinion as Chair of Caricom, “it is unfortunate that her statement comes on the eve of the Caribbean Court of Justice (CCJ) being engaged in a matter of appeal”.

On Tuesday, the main opposition People’s Progressive Party (PPP) approached the CCJ to appeal the decision handed down by Guyana’s Appellate Court. The CCJ on Tuesday evening granted an injunction, delaying GECOM from issuing a declaration of the results of the election until it hands down final orders relating to the application.