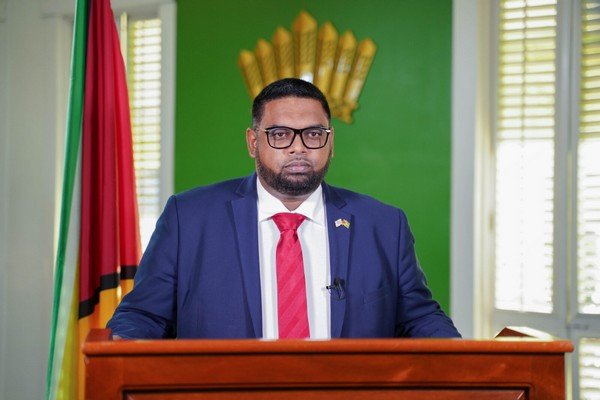 DUBAI, United Arab Emirates (CMC) — Guyana’s President Dr Irfaan Ali has told international investors that the Caribbean region is a stable platform with all of the components for a modern and emerging economy.

The forum is being hosted by the Barbados-based Caribbean Export Development Agency, in association with the Caribbean Association of Investment Promotion Agencies (CAIPA).

Ali told the forum of the region’s economic potential and opportunities in environmental services, the blue economy, agriculture, infrastructure, tourism and other areas of potential and predicted growth.

He said that although the region’s population is small, the market access it provides through its booming tourism industry allows investments to thrive.

He said in addition, the Caribbean is not only a zone of peace but an “exclusive zone of tolerance and inclusiveness”, built on resilience and diversity and that its location and direct access to South, Central and North America makes it an investors’ dream.

“In almost each of these areas, we have specific investment agreements and trade arrangements that will give you a distinct advantage in pursuing your business interests,” Ali said, adding that “a complete rebuild of our logistics and transportation model” is a priority of the region.

“We could create all the goods, but if you don’t have the means to move the goods and the services, then you have a serious problem.”

Regarding Guyana, President Ali told the forum that his administration is holding discussions with the UAE on developing a logistics hub. Barbados’ Prime Minister Mia Mottley will be in the UAE to work on a project called the ‘Sea Bridge’.

He said that these projects will move people, goods and services throughout the region, assuring delegates that every Caribbean country is “committed to providing an incentive mechanism to support this logistics and transportation model”.

“Unless we fix this problem, in terms of logistics and transportation, we will not be able to capture the results we want to capture. So this, by itself, presents an opportunity, a major opportunity for investors,” President Ali said, adding that every country in the region is on a transformative infrastructural drive.

“We are now talking about building a bridge between Guyana and Suriname. Suriname is looking to build a bridge between Suriname and French Guiana. We are looking at building an infrastructure that will support the development within the region,” he said, adding “so, there is the opportunity, and that is why today, as leaders in the Region, we are more outward-looking”.

President Ali said that the regional integration movement, Caricom was never able to benefit from all of the agreements it has forged around the world since it lacked the means to infiltrate the larger markets.

He said this is why the Caribbean is showcasing its investment potential to the Middle East.

“You have the capital, we have the environment, and we have the enabling infrastructure to get you into those markets based on the existing agreement.”

He told the forum that Guyana is developing its infrastructure to take advantage of future investments adding that like other Caricom countries Guyana is moving forward through the use of renewable energy and long-term, investments.

Ali is expected to participate in the Global Business Forum LATAM later on Wednesday which will also be attended by the Brazilian President Jair Bolsonaro and his Colombian counterpart, Ivan Marquez.

WhatsApp
Facebook
Twitter
Linkedin
Email
Print
Previous articleZelenskyy thanks Japan for its sanctions on Russia and warns of a nuclear threat
Next articleVirtual Discussion: It’s Time to Invest