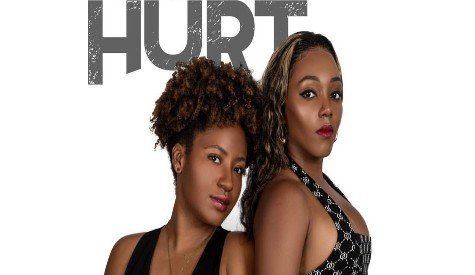 Hailie Jae & Chàrnelle penned the lyrics for “Hurt”; the recording was done by NYQ Beats, mixed and mastered by Joshua Simmonds, and produced by ASAP Creative Group, making this a completely locally produced project.

The artists also teased that they are working on releasing “Extended Play” records often referred to as EPs (a musical recording that contains more tracks than a single, but is usually unqualified as an album or LP), however, no release dates have been confirmed.

“I’ve loved music since forever. I actually just started trying to pursue a solo career… Mostly [been] with choirs from when I was younger. Did piano, did guitar, stopped, did ballet and ended up just playing with a lot of gospel bands and I just recently decided that I love music so why shouldn’t I do music… and I’m actually working on my EPas well which should be released by the end of the year,” stated Chàrnelle.

Hailie Jae shared a bit of her journey as well.

“I’ve been doing music a while, I’m not a stranger to the music scene… I sing with different bands, I used to perform with Royalties Band now I’m currently with Havana Express… But now you know with everything that’s going on and a little bit of extra time on my hands I decided to work on a little project which is… I’m working on my EP… releasing one of my singles on the EP call Hurt featuring the lovely Chàrnelle of course…”

During their interview, the female artists were asked about navigating a local industry dominated by men.

“Well I would say music is very much still a boys club in St Kitts so it’s a bit more difficult to break the ice; break the surface but with some resilience and people like Hailie … If we work together we can actually make it… I’m really tired of the boys club.”

Hailie Jae went on to explain how and what inspired the song.

“The song was really like a combination of experiences and things you’ve seen happening in the real world so I just wanted to make it relatable… In a time where women empowerment is on the rise like I just wanted to be a part of that and create something that women can relate to,” explained Hailie.

She then went on to explain that the concept for the music video was a collaborative effort between both artist and the producer, ASAP Creative Group.

The artists addressed some positive and negative effects the COVID-19 pandemic has had on their careers. Both artists agreed that the pandemic gave them time to focus on their prospective solo careers and to conceptualize their work during lockdowns.

“I agree with Hailie it gave me time to actually write and conceptualize and everything so that’s a plus… Other than that as she said with performances etc that’s not possible … I wouldn’t say it was a setback, I would look at it as a blessing to actually get some extra time…it was really a plus, except for the video,” Chàrnelle expressed.

Hailie Jae & Chàrnelle danced around the question of future collaborations but hinted at the possibility, after some coaxing, and asked that audiences stay tuned to what they have in store.