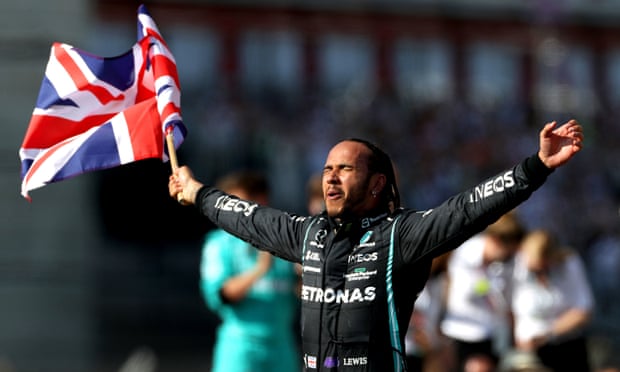 (The Guardian) Joyous and revelling in his success after a gladiatorial victory in the British Grand Prix, Lewis Hamilton ran to his adoring crowd clutching the union flag, arms spread wide as if he would bellow: “Are you not entertained?” They were indeed, on their feet and thunderous in their acclamation having witnessed a race for the ages.

Silverstone boasted drama, incident, controversy and a racing comeback worthy of a world champion who has reignited his title fight after giving definitive notice he will not yield an inch further this season.

A capacity crowd of 140,000, the largest sporting event to be held in the UK since the pandemic began, who had sat sweltering in almost 30-degree heat with expectation and tension ratcheting up until the off, were treated to an almighty tussle that went white hot on track.