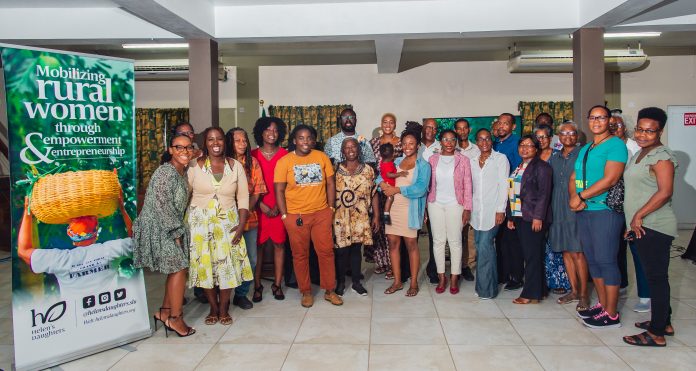 Since its formation in 2016, HD has contributed to the economic development of women by
supporting over 1, 200 female farmers in St. Kitts – Nevis, St. Vincent, and the Grenadines, and St. Lucia. The network has given women access to training, resources, and opportunities to expand their reach and impact as entrepreneurs in the agriculture sector.

Following the theme for this year’s IDRW observance, Cultivating Good Food For All,
attendees were introduced to HD’s plans for the Federation including training and financial
opportunities unique and applicable to Kittitians and Nevisians. Stories of resilience and
inspiration from local farmers were also highlighted.

According to Executive Director of Helen’s Daughters, Keithlin Caroo, the launch highlights
the NGO’s commitment to shifting the narrative of women in agriculture so that women are
seen, heard, and celebrated in the field.

“When Helen’s Daughters was founded, we wanted to empower rural women to be seen as
equal to their male counterparts in the agriculture sector. We were aware that rural women
were indeed the pillars of Saint Lucia’s agricultural success, whether on or off the farm.
Over the past few years, we have noted that this is the reality across the Caribbean as well.

Our work expanded beyond St. Lucia when the UWI approached us about extending our AgAcademy to St Vincent and the Grenadines and St Kitts and Nevis. Since then, we have
formed an executive body in St. Kitts – Nevis and developed programs and plans to mobilize and support female farmers across the Federation. We look forward to seeing more women leading the industry through our support”.

The launch ceremony was held at the Department of Agriculture Conference room on
October 15, 2022.

An official launch is expected to take place on Nevis in the coming months.

WhatsApp
Facebook
Twitter
Linkedin
Email
Print
Previous articleCIBC FirstCaribbean affirms commitment to inclusion and diversity by hosting a workshop on deaf awareness for members of the business community
Next articleUSVI: Bryan to Let Go Underperformers Across the Board, Will Expand Authority of CEOs to Push Progress Forward