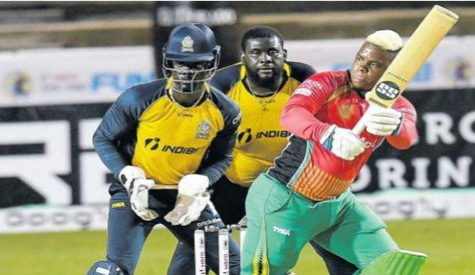 TAROUBA, Trinidad (CMC) —Shimron Hetmyer stroked his third half-century of the season to end a worrying slump as Guyana Amazon Warriors won their third on the bounce to secure a semi-final spot in the Hero Caribbean Premier League (CPL) here Wednesday night.

Chasing a modest 110 at the Brian Lara Cricket Academy, Amazon Warriors strolled to their target in the 14th over to complete an uncomplicated seven-wicket victory over St Lucia Zouks.

The left-handed Hetmyer carved out a responsible unbeaten 56 off 36 deliveries, hitting half-dozen fours and three sixes to anchor the Amazon Warriors run chase and secure them a fifth win and second place in the six-team standings on 10 points.

Having begun the tournament on a high with two-consecutive fifties, Hetmyer had scraped only 45 runs from the next six innings but regained his touch at the ideal time with the final four beckoning.

Seamers Naveen-ul-Haq (2-24) and Keemo Paul (2-25) had earlier stalled the Zouks innings, leaving the Darren Sammy-led unit with a meagre 109 for seven from their 20 overs.

Javelle Glen, batting at number eight, top-scored with 23 while Rahkeem Cornwall got 21 at the top of the order, but the remainder of the Zouks batting flopped.

Cornwall belted a couple of fours and sixes in a 13-ball cameo, but when he perished off a leading edge to cover off speedster Romario Shepherd in the sixth over, Zouks were struggling 26 for three.

Two partnerships then helped propel Zouks past the 100-run mark. First, Najibullah Zadran (19) and Kavem Hodge (13) put on 31 for the fourth wicket as Zouks crawled to 47 without further loss at the halfway mark.

When three wickets tumbled for 19 runs, Glen hit three fours off 22 deliveries in an unbroken 33-run, eighth-wicket stand to eke out precious runs at the back end of the innings.

In need of early wickets, Zouks claimed Brandon King cheaply for five, losing his leg stump to seamer Scott Kuggeleijn in the third over but Hetmyer arrived to settle things down in two-successive partnerships.

He first put on 39 for the second wicket with left-hander Chandrapaul Hemraj (26) before adding a further 40 for the third wicket with Nicholas Pooran (10), to put Amazon Warriors within touching distance of victory.