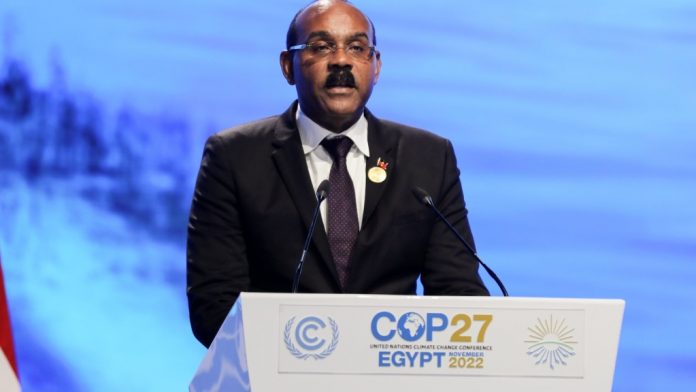 Antigua and Barbuda Prime Minister, Gaston Browne and his Tuvalu counterpart, Kausea Natano filed the request as part of the efforts to protect and preserve the marine environment in relation to climate change impacts, including ocean warming, sea level rise, and ocean acidification.

“This is a historic step for Small Island States, to invoke international law in the effort to ensure that the major polluters take their obligations seriously, to prevent harm to vulnerable states or to compensate them for damage. Our peoples are already feeling the catastrophic consequences of climate change. We cannot continue business as usual,” said Prime Minister Browne.

Prime Minister Natano remarked that“If humankind does not act with urgency, some of the island nations will disappear under the sea within a generation.

“Protection of the marine environment is a matter of survival. Greenhouse gas emissions should not be treated less seriously than other forms of pollution. If anything, they require even greater urgency and a commitment to respect existing principles of international law,” he added.

The proceeding before ITLOS is the first inter-State case addressing the international legal obligations of States with regard to climate change.

The request to ITLOS is complementary to and in support of the initiative of Vanuatu, to have the UN General Assembly request an advisory opinion on climate change from the International Court of Justice (ICJ).

Informed sources told the Caribbean Media Corporation (CMC) that it is anticipated that ITLOS will schedule the filing of written pleadings and a hearing in 2023, in which all State parties to UNCLOS as well as international organisations will be able to participate.

COSIS is assisted by a Committee of Legal Experts consisting of 14 distinguished jurists from around the world. The Agreement establishing COSIS was signed at COP26 on October 31, 2021, in Edinburgh.