Hon. Akilah Byron-Nisbett In The Process of Conducting “Listening Tour” 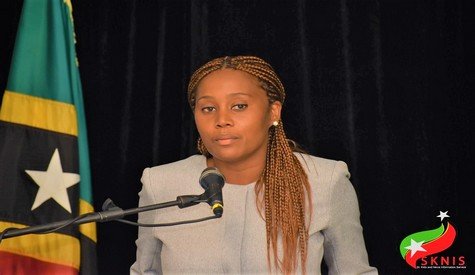 Basseterre, St. Kitts (SKNIS): Speaking at the Prime Minister’s Press Conference on August 11, 2020, held at the National Emergency Management Agency (NEMA), Minister of Health, the Honourable Akilah Byron-Nisbett stated that she is in the process of conducting a “listening tour” to understand the needs of the staff at the Joseph N. France (JNF) General Hospital.

Minister Byron-Nisbett said that she has already met with the management within the Ministry of Health and is now taking the “listening tour” down to the staff level.

“I’m meeting with the groupings, be it Environmental Health Officers, which was the first grouping, the nurse mangers within communities, the nursing staff within JNF General Hospital, as well as the clerical staff, the cleaners and whoever else is involved within the ministry,” she said.

The minister noted that the idea is to not only be able to hear the concerns of staff members, but most importantly the ideas they have for improvement and how they can work together bring it into fruition.

Minister Byron-Nisbett stated that her ministry is also working on the implementation of the Health Information System as it is believed that it will not only significantly improve the service offered at JNF General Hospital, but is intended to expand out into the community as well.

“We have a team that has been put together within the ministry. It’s a collaboration between the Ministry of Health and the Department of Technology,” she said. “This team will be training the staff in the use of the Health Information System.”

She noted that one of the advantages of the Health Information System is that it allows the medical records of every citizen to be in one place.

“Even if you say you have a service done at Joseph N. France Hospital and you need to have follow-ups done within the community, the idea is that in the future once your record is at Joseph N. France and you move to community, by the use of your medical ID provided to you on booking at the hospital, the community health will be able to determine what you were there for, what is the position of your health, etc to make it much easier for us to be able to know and provide that service to the general public.”

Another upcoming project is to connect all of the health centres to JNF General Hospital so that this information can be shared between both the general hospital and the community health centres.

“It would be important for us to make sure that that Health Information System is implemented and is being used within JNF and further afield within all of the health centres and other institutions such as Mary Charles and Pogson as well with the intention of being able to have this same thing implemented over at the Alexandra Hospital in Nevis as well,” said the minister.

Over the next budgetary year, more emphasis will be placed on primary health care, said Minister Byron-Nisbett.

“We want Joseph N. France (JNF), Mary Charles, and Pogson and Axleandra to be a facility used for emergency,” she said. “What we are seeing is more and more persons coming into these facilities with Non-communicable Diseases (NCDs), diseases they can control at home, or if they have the knowledge and know how, how to be able to treat them; if they even access the services of the health centres within their local community, they would not have that need to come to JNF.”

Minister Byron-Nisbett stated that in order to remove the strain on JNF with some of the repeat patients because of NCDs, more effort will be placed on getting persons to realize the importance of the primary care sector through the health centres and the use of the district medical officers.

With regards to improving the hospital, Minister Byron-Nisbett spoke to the building of a new hospital.

“The area has already been identified in West Basseterre, but we do understand that will take time and in the meantime, there is still some areas within JNF that need some improvement done,” she said. “So, over the next year we will be looking at moving the Cabinet and Finance to support the continued build-out of some areas within JNF. For instance, where the laundry and kitchen staff are located they need particular attention because until the new hospital is built, they still need to work in an environment that is safe and healthy for them as well. So, those improvements will be looked at in 2021.”

NIA CHARLESTOWN NEVIS -- The preparatory work being done at the Vance W. Amory International Airport in Nevis will be completed in time for...
Read more
Press Release

NIA CHARLESTOWN NEVIS -- The following is an address by Hon. Hazel Brandy-Williams, Junior Minister of Health and Gender Affairs in the Nevis Island...
Read more

NIA CHARLESTOWN NEVIS -- The preparatory work being done at the Vance W. Amory International Airport in Nevis will be completed in time for...
Read more

(Trinidad Guardian) The authors argued that since the Caribbean countries are dependent on tourism for anywhere between 20 to 90 percent of GDP and...
Read more

(Trinidad Guardian) FIFA president Gianni Infantino has been given the green light to retake control of the T&T Football Association (TTFA). Delivering a judgement during...
Read more

(Jamaica Observer) Efforts to find 15-year-old Sanique Leachman, who is suspected to have died after a major landslide in Shooter's Hill, Bull Bay, St...
Read more

The Rotary Club of Liamuiga Marks Historic Progress Toward a Polio-Free World While Urging the Community to Help End the Paralyzing Disease - www.winnmediaskn.com/?p=4920 ... See MoreSee Less

The Rotary Club of Liamuiga Marks Historic Progress Toward a Polio-Free World While Urging the Community to Help End the Paralyzing Disease | WINNFM 98.9

The Rotary Club of Liamuiga Marks Historic Progress Toward a Polio-Free World While Urging the Community to Help End the Paralyzing Disease - https://www.winnmediaskn.com/?p=4920

@apex_4m sits down with the Island Tea Crew to tal

As officials brace for a potential increase in cor

St. Kitts and Nevis will have a Discounted Value A