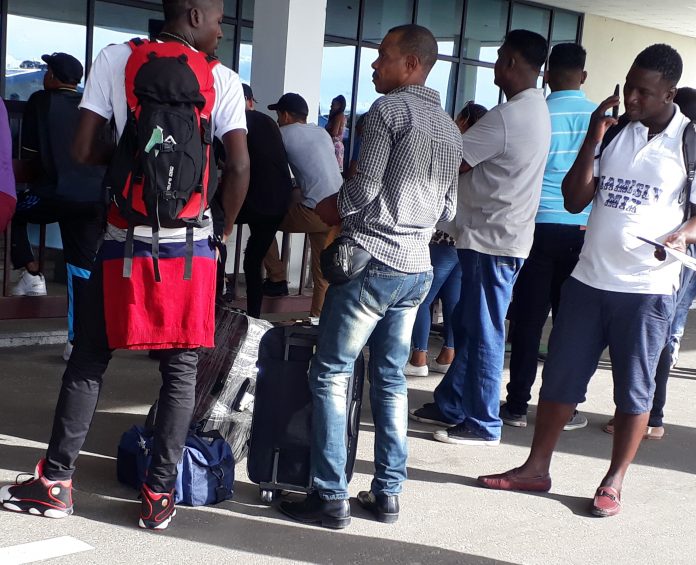 GEORGETOWN, Guyana (CMC) — Several Caribbean human rights organisations and individuals have written an open letter to the Guyana government urging it to “clarify” the status of 26 Haitian nationals, including women and children, who they said had entered the country legally from Barbados in early November.

The human rights groups, including the Caribbean Centre for Human Rights, Stand up for Jamaica and the Transparency Institute of Guyana Inc (TIGI), have in a letter published in a local newspaper, said that the Haitians were granted up to six months’ stay in the country by immigration.

“According to media reports, they were taken into custody the very next day, and are described as being either in ‘protective custody’ or ‘detained’, with ‘the Government claiming that they might be victims of human trafficking,’ and that they might be sent back to Haiti,” the letter noted.

They said that Guyana’s law on trafficking in Persons and the Palermo Protocol to which Guyana adheres is very clear that trafficking in persons is an offence against the victim/survivor of trafficking.

“In other words they should never be detained or charged for being a victim or survivor of trafficking as to do so would be a case of re-victimisation and a violation of Guyanese and international law. We note that the Haitians currently in custody have reportedly insisted that they were not victims of trafficking, and that they have not broken any laws.

“We note that in January 2019, an Executive Order amended the Immigration Act to include Haiti under the schedule of countries that benefit from six months visa free stay in Guyana.

“We call on the Government of Guyana to clarify whether, as the media reports, the Haitians currently in ‘protective custody’ entered the country legally under the freedom of movement provisions of the Caribbean Community’s (Caricom) Revised Treaty of Chaguaramas.

“If they did, and have the six-month stamp in their passport, then by detaining them and removing them from Guyana, the Government is violating its treaty obligations under the Revised Treaty of Chaguaramas, as stipulated by the 2013 ruling of the Caribbean Court of Justice (CCJ) in the case brought by Jamaican national Shanique Myrie against the Government of Barbados,” the human rights groups and individuals wrote.

They said that in that landmark decision, the CCJ ruled that Caricom nationals have the right to enter any member state and stay there for up to six months, “subject to the rights of member states to refuse undesirable persons entry and to prevent persons from becoming a charge on public funds”.

The human rights groups say that if the Haitian children, women and men currently detained have a six-month stamp in their passport, “then it means that the Immigration Department had the opportunity to invoke the circumstances discussed in the Myrie case to refuse entry but saw no reason to take such action”.

“And from the reports, they have been detained for some three weeks so far. Have they been charged? Is this not a violation according to our Constitution, in that someone — in this case, 26 Haitian children, women and men — cannot be held for more than 72 hours unless brought before a court to be charged?

“We wish to register our special concern for the Haitian children who have been separated from their adult compatriots. These children are undoubtedly being traumatised by this action as they are unable to communicate their needs and feelings effectively in English. Reuniting these children with their parents or guardians should be the utmost priority.

“This distressing situation that has been reported on in the media, has prompted this request for the Government of Guyana to provide urgent clarification,” the human rights groups and individuals wrote.

Wipe away the Monday blues with Mainstream Monday with Deejay Flames. Live now on WINN FM 98.9, via www.winnmediaskn.com or www.playdj.tv/DeejayFlames🔥💃 🕺 Rock out to the latest in Pop, Hip Hop and RNB on Musical Surge from 3-6 p.m. Music to power your soul.#winnFm #WinnRadio #stkitts #Pop #hiphop #rnb #caribbean #liveradio #livemusic ... See MoreSee Less

Douglas and Natta-Nelson do not qualify to be Senators; to be appointed Ambassadors instead - www.winnmediaskn.com/?p=27856 ... See MoreSee Less

Douglas and Natta-Nelson do not qualify to be Senators; to be appointed Ambassadors instead - https://www.winnmediaskn.com/?p=27856

Position assigned to the Hon. Isalean Phillip at t

Portfolios assigned to the Hon. Garth Wilkin at th

Portfolios assigned to the Hon. Marsha Henderson a

Portfolios assigned to the Hon. Samal Duggins at t

Portfolios assigned to the Hon. Konris Maynard at