Hundreds rescued after fire breaks out in Hong Kong high-rise 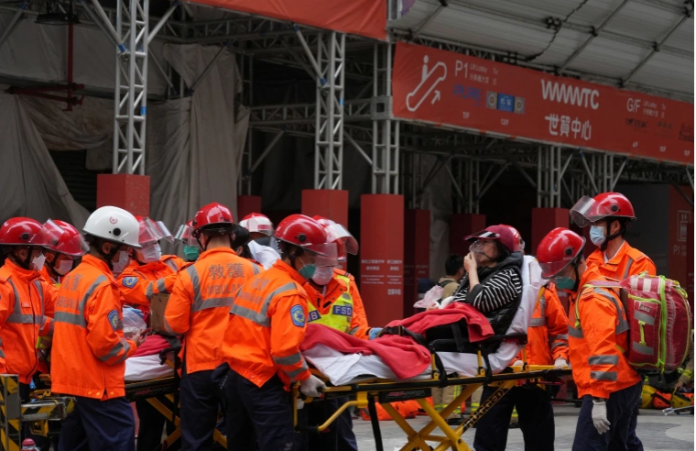 (Al Jazeera) More than 1,200 people have been rescued from Hong Kong’s World Trade Centre as dozens of firefighters managed to extinguish a fire that ripped through one of the city’s busiest buildings and left more than a dozen injured.

Police at the scene told reporters that everyone at the 39-story structure in Causeway Bay has been brought to safety by 5 pm (09:00 GMT) after more than 300 were trapped earlier on the rooftop of the building, which houses both offices and a shopping centre.

“The fire has been extinguished,” said Al Jazeera’s Britt Clennett, reporting from outside the ashen building.

“This is one of the busiest shopping districts and it has caused a lot of chaos and a lot of stress,” said Clennett. “This happened during peak hour,” she added.

“There would have been many people inside that building having lunch with their colleagues, perhaps out shopping.”

The cause of the fire is not yet known, but the South China Morning Post (SCMP) said the fire broke out at 12:37 pm local time (04:37 GMT) in an electrical switch room before ripping through the scaffolding of the building, where renovation work is underway.

Police said they had opened an investigation into the cause of the fire.

Earlier, local media had reported that up to 350 people were stranded on the rooftop of the building waiting to be evacuated. Meanwhile, videos posted online showed dozens of people, including the elderly, waiting at an open-air area on the fifth floor.

“Initially we were walking down but at around the 17th floor we heard that there’s heavy smoke, so we decided to head to the roof instead,” office worker Ernest Chan, who was one of those evacuated to the roof but made his way down using the staircase, told SCMP.

“But we waited for too long and the visibility seemed clear, so we walked down again. If we didn’t make this call we would still be waiting upstairs,” said the 28-year-old.